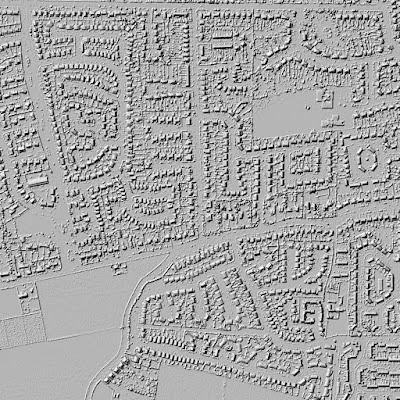 I hope this is useful to someone. Please feel free to ask for more information if I've not made anything clear.
Posted by Chris Hill at 14:36

What level of accuracy do you think you are getting? How far is it possible for you to process the data then hand over to someone who has the time and energy to explore the import side of things?
RobJN

There is a lot of data to process; 1 km² needs 1 million database rows. Hull, a moderate city, needs about 80km². This is temporary data, but nonetheless I can't imagine me creating data to cover much of Britain. The process needs existing building outlines to compare the heights to and the EA data does not cover all of Britain - it is intended for flood assessment.

Are you intending using any of it? Would you like an area (say 1km²)to test?

I think the accuracy is around femtometers ... (-:

@Martin, the first release used a spurious precision to less than the diameter of an atom. They fixed that now to 3dp of a metre.

Chris, I met with the Mappa Mercia group last night and we agreed that we'd be interested in the Worcester data (I've checked and it looks like there is data available there). As per your kind offer above can you please send me a copy of this when you have the time to do the required processing. My emails on the mailing lists (example: https://lists.openstreetmap.org/pipermail/talk-gb-westmidlands/2015-October/001910.html ). Thanks. RobJN