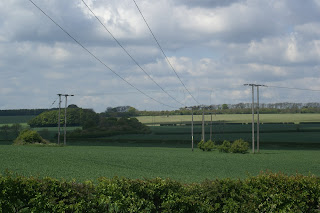 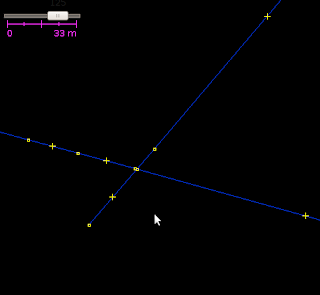 A couple of short trips out today have helped me to understand the way power lines are represented by the Ordnance Survey VectorMap shape files. The shape file gives no clues about the power lines, they are all labelled the same, but there are two types of power line represented.

The first type is lower voltage that is supported by two wooden poles. It does seem that the nodes do represent the actual poles, at least most of the time.

The first photo shows where two lines join with a bit of a crossover and this  to be represented by the ways shown in JOSM.  The crossover seems to be to relieve the strain in the cables. I have followed a couple of lines where they were accessible and checked the poles and they seem to be where the nodes are. This is very far from exhaustive, so I'm only going to add lines that I have checked.  I also followed a short bit of power line on a single pole and that turned out not to be part of the OS data set. 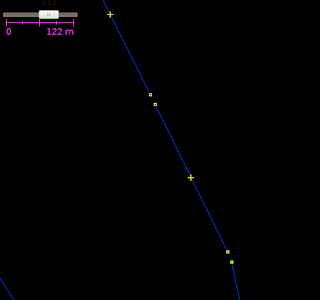 The second kind of power lines have steel pylons. I have checked a couple of lines and the gaps in the ways do seem to be the position of the pylons. I think there are different sizes of pylons. If the gap in the way is proportional to the size of the pylon it might be possible to deduce the type of power line, but again I haven't been able to confirm this yet.

The biggest problem I can see is that it will be a fiddly job to join each short section together with the node in the middle for the tower. I'll see if I can sort out a program to help out ...