The end of the strangely warm start to October saw us out onto the Holderness Plain looking for names of roads and any other stuff worth improving. Once again we discovered a road name that Ordnance Survey have just made up without checking what is really there. There is a road called Fox Covert Road just north of Otteringham. There is a sign which is not new, but is perfectly readable. 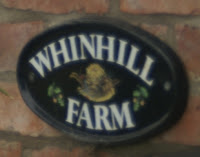 OS call the road Whinhill Road. The road is a minor lane which only goes to a couple of farms, the second of which is called Whinhill farm, so I guess that's where OS get the name from. Nearby OS show a road called North End road and there is a farm called North End Farm too, this time no sign boards to confirm or deny this. The road from Otteringham is called Station Road because it headed to the abandoned station on the Withernsea line, which fell under Dr Beeching's axe. The place where the name changes to North End Road is not clear, but near the farm seems a good idea. I suspect the road may have been called North End Road long before part of it was called Station Road, but I can't be sure.
Posted by Chris Hill at 17:08