Buried in a wall

I decided to clear up the anomaly of a post box in West End (Road) in Cottingham. The Royal Mail list seemed to have it confused with one in South Cave. The box in West End Road, described as just West End, without a village name in the list, does indeed have the reference listed. We checked the rest of the boxes in HU16. Some of the boxes are set into a wall, which means they don't stand out. We drove past the one in Thwaite Street, completely missing it in the traffic, but then saw it on the way back. The pillar boxes stand out much more than the buried ones. 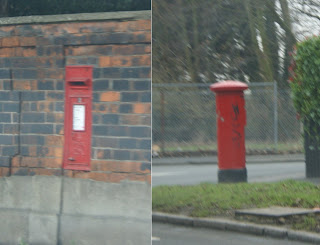 We also checked out The Lawns a little bit. This is a student halls of residence for the University of Hull. It used to be signed as private, but those signs are not there now. When Cottingham was flooded in June 2007 a large police station on Priory Road was closed since the ground floor was under water. It is still not completely operational. A local police station was opened near the entrance to The Lawns so, I guess, public access was needed to get to the police station.

I have not mapped the various buildings on the site. Yahoo! images are much too lo-res and I don't think I'd be welcome wandering round the halls with a camera and a GPS. Maybe some one at the university can help.
Posted by Chris Hill at 15:33

I would agree, if your concerned about going around the campus then leave it to a student or staff member.
I don't like mapping colleges that aren't mine once it's dark or if it's way out of term time.