One Ways, Restaurants and Hockey Sticks

We have been chasing down some more post boxes, HU5 is now complete. In passing we noticed that Princes Avenue had changed, or rather the small residential streets off it, so we thought we would check the area out again. There is a small jumble of streets to the west of Princes Av, which are all 20mph streets and now are all one ways. We had some marked before, but now we have them all - I think they've changed recently but I could be wrong. Along the way we saw a lot of amenities we had missed before, especially restaurants. 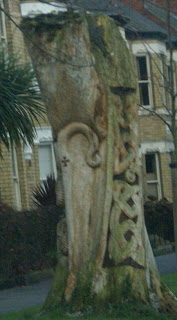 We also found a cycleway next to a church. Jean's aunt Rita was married in the church and Jean thought it was called St Trinian's - close it was St. Ninian's.

The area is known locally as The Avenues, and some of the bigger avenues are tree lined, but one or two trees have died over the years. Someone has carved a few into a sculptures. The failing light means the picture doesn't really do it justice.
Posted by Chris Hill at 16:23