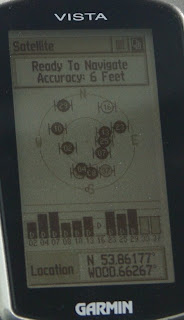 We set off into the beautiful Yorkshire Wolds on a wet and very windy day to try to find the route of part of the Wilberforce Way and to add try to add a few little bits of the (Yorkshire) Wolds Way too. I had seen signs around the Hudson Way near Beverley so we started there. I don't have the book written about the route (only a leaflet), which I think is probably a good thing - it forces you to only add what is actually on the ground. The leaflet suggests that the route leaves the Hudson Way to go to Cherry Burton and Etton, but I found absolutely no sign of these detours at all. We did find a couple of bridges over the abandoned railway line. We followed the route into Market Weighton where it joined up with the Wolds Way.

In Market Weighton I got the very best GPS reception I've seen. It was briefly 5 feet, but was 6 feet by the time Jean took its picture. The last two satellites are 33 and 37 which are EGNOS ones.

There's still a lot of the route to add and I'll enjoy wandering through the Wolds finding it, but maybe on a warmer day.
Posted by Chris Hill at 18:44