I went to see my uncle yesterday and he gave me a surprising gift. He raked about in a cupboard and came up with some rolled up maps. He got them from a building clearance some years ago. In an office there was a pile of maps laid flat that was nearly a metre high. He rummaged through them to find anything he was interested in and kept about twenty - only a small fraction of the pile. The rest were eventually destroyed! He gave me a couple to bring home - I'm going to look at the rest another day. 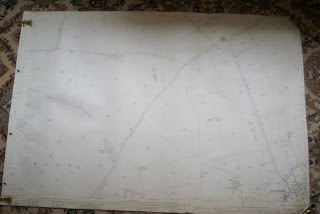 The maps I brought home are Ordnance Survey maps dated 1927. They are a whopping 1:2500 scale, so 40cm to 1km. The attached photo, which is just a snap, shows they are in black and white, with fine detail, but at that scale a lot of empty space in rural areas. The map covers about 1½ km by 2½ km and has part of the village I live in on one corner. The area of my house is just part of a field. Some modern names give clues to the past. Close to my house is a place called Pinfold Cottage, sure enough there is a pinfold on the map - a walled enclosure where animals were kept. There a Chapel (site of) nearby, where Chantry Lane is today.

Some of the roads and tracks have names that I know are used locally, but I have not found any documentary evidence for them before. One annoying one is a road called Swanland Dale. This name appears on Google maps, but no-one ever uses that name, indeed I couldn't find anyone locally that had ever heard it used or knew of it. The name certainly doesn't appear on a name board so I assumed it was an Easter egg and ignored it. Now it seems it really is called Swanland Dale, so I'll change OSM to use this name and a couple of others like Tom Potts Row and Stonepit Lane.
Posted by Chris Hill at 15:53