Howden is a market town in the western side of East Yorkshire. As towns go it's pretty small and pleasant. It's very close to the M62, so quite a few of the modern shed-style industrial and commercial premises have built up around the edges, but the old centre seems to have preserved much of its charm. 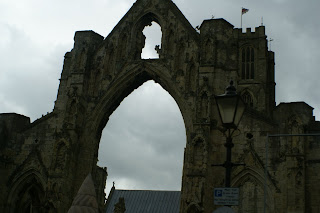 We didn't finish the place in one go, but it should only take one more visit to get the basic layout of streets and general points of interest. There's a large, functioning church, known as the minster, with an older set of ruins next to. We skipped by that intending to have a better look on foot next time. There's also a park or playing fields close by so that would be best investigated on foot. I need a better look at the schools and cemetery too.

One thing a did notice was the local police station. Bearing in mind my last post I was particularly careful about how we recorded that. 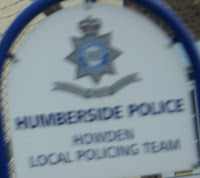 No police officers were harmed in the making of this map, and I even sneaked a photo of their sign, cunningly disguised by a blurry focus just in case.

We'll be back to finish Howden soon, but to help matters I'll wait until the latest update to the Garmin GPS maps are released so we can then see where we have been.
Posted by Chris Hill at 12:33

The more interesting thing about that picture is that Humberside no longer exists. Howden should now be in East Ridings of Yorkshire shouldn't it?

Humberside did indeed get the push more than thirteen years ago, but the police force remains Humberside Police, which covers the area of the old Humberside county.