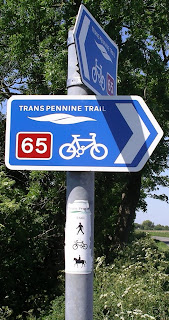 We have just got back from a lovely little ride along the banks of the Humber Estuary. The main reason was to complete the little missing part of the national cycle network route 65 from Broomfleet to Faxfleet. This is also part of the Trans-Pennine trail, but I haven't yet decided how to map that. The TPT is intended for foot, horse and cycle and much of it is just one route, but there are sizable chunks where the different modes of traffic divide. Westwards from Faxfleet is a good example: the pedestrian part runs along a footpath by the reed beds at the side of the Humber but the cycle sticks to the small country road. One way to map it is to create separate relations for foot and cycle. Where they share the same route there will just be two relations together. The only problem would be that would have similar names, but they would show up on different map types. Another way is to just create separate braids of the same relation, but I think this is messy.

At Faxfleet we stopped to look out over the Humber reed beds - an internationally important habitat for breeding birds. We got scolded and chittered at by mistle thrushes with young nearby, so we left them to it.

The track crosses the Market Weighton Canal where there is a lock for boats to enter and leave the Humber.

The gate on the track has a very forceful sign warning people to keep out, but there is a public bridleway, which is part of the national cycle network, running through the gate. The gate has a standard horse rider-friendly catch on it, so why the obnoxious sign?

The lock itself is somewhat puzzling. There is a solid concrete hump-backed bridge, refurbished in 1994, over the waterway with the lock under the bridge; a lock gate at either side of the bridge. This low bridge will seriously restrict the height of any vessel using the lock. I suspect that a canal barge would fit under the bridge, but not much else, maybe that's the point to restrict what can get out of the Humber into the canal. I don't know how much of the canal is navigable - maybe it would be interesting to find out.
Posted by Chris Hill at 17:03

I think it was RCN 20 that is also the Walney to Wear route, a cycle/horse/foot alternative to the main Coast to Coast (West-East) route. There are differences at least for horses. I think the full W2W route matches the full RCN 20 route so I just adjusted the name, and I agree it makes sense to create a different route for the horses.