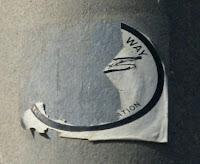 We set off to check out more of the Wilberforce Way. It is supposed to start at the wonderful aquarium in Hull called The Deep. It is then supposed to head roughly north along the river Hull until it leaves the city heading for Beverley. We spent an almost completely fruitless afternoon chasing it. We only have the leaflet to go on and its map is next to useless, so I was dependant on finding signs on the route. We only found one sign that might be part of the route, but the picture shows it is only a hint. The scrap that remains doesn't match any other sign I have a picture of and there are no other routes in this area that have 'Way' in their name. All the same I can't add this to the map as the Wilberforce Way. We will search beyond the city to see if we can find the route further north to join to the existing route we have already found.

I could buy the book of the route, but I feel bad about this for two reasons. Firstly I'm a Yorkshireman. We are much like Scotsmen, but with all their generosity wrung out, so spending money on the book might sting too much. The second, more serious, reason is that if I can't find signs on the ground then simply lifting the route from a book is arguably a breach of the publisher's copyright. 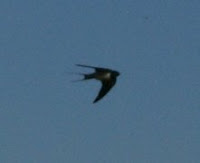 The upside of the search was that we added some cycle lanes along the way and we saw our first swallows of the year. The bird books all call them barn swallows, but the 'barn' bit is never really used here. I suppose it's to distinguish them from any other kind of swallow but that's what the Latin name is for, which, if you're interested is Hirundo rustica. I managed to snap a couple of pictures of a swallow, which is tricky because they fly fast and jink suddenly.
Posted by Chris Hill at 20:49