We've been working our way through Hull, and there's still quite a lot to do. I thought it might be a good idea to trace the outer edge of what remains, so we set off in the rain to check it out. We saw more new developments, though mostly small with a few unsold houses.

We followed the roads that are furthest east, some were the outer edge of the city like Noddle Hill Way but others were little residential roads. It was a bit of a different way to operate and I enjoyed it, but especially the result. We really now have the complete outside edge of the whole city on the map. It shows that the eastern boundary of the city is quite a long way from the edge of the houses. We just have to fill in the gaps towards the centre now ... 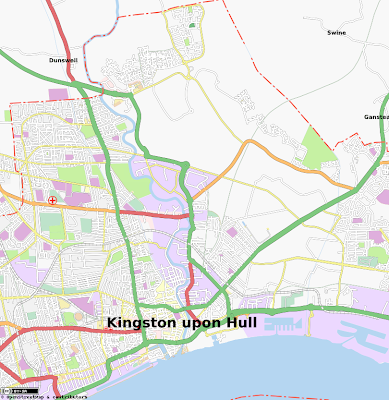 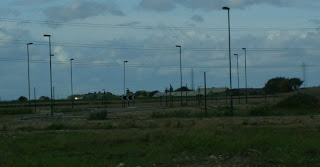 of north Hull. The estates around the Kingswood shopping area are still being built. I think it could take a long time to finish because lots of houses are standing complete but unsold. Still others are started as foundations and then covered. Yet more roads are laid out, with roundabouts and street lights in fields.

I couldn't get to all of the roads, some of the small roads are not yet complete. Some of the bigger routes that lead into these fields were blocked with a gate or drums. I think the fields will remain green for a couple of years yet as the building boom has drawn to an abrupt halt. There are a couple of developments that we have thought that we need to revisit when they are complete, but that might be a long time yet. Still, if new developments are at a standstill it's easier to keep the map up-to-date.
Posted by Chris Hill at 18:41 No comments:

Estates, bleak or not

We've been out a few times in the last week or so and the map of Hull is slowly improving. Greatfield is now complete, another chunk of Stoneferry is mapped and now a piece of Bransholme is on the map.

Greatfield was straightforward and went well. At the end of a road there was a large space for buses to turn round. I still haven't added it to the map - I'm not sure how. Greatfield is not the smartest part of city but there is a feeling of pride in some parts.

The part of Stoneferry we completed borders East Park, which we have not added yet. Westcott street was a bit of a pain, with many very short stubs sticking out at both sides, but they're on the map so we don't have to return there now.

Today we ventured to Bransholme again in the rain. We completed the roads of the northern part of the estate, but there are loads of footpaths that could be added, the whole estate is a maze of paths. There were more derelict houses on show. I read today that there is a shortage of social housing in Yorkshire, what I saw was that a large estate has a lot of empty houses. I don't suggest that people are housed there, just that the architect who replaces it understands that people want to live in communities not estates. There is a lot of large, empty grass spaces that look tidy enough, but the word that springs to my mind is bleak.
Posted by Chris Hill at 18:46 1 comment: