Bus maps and a fool

We've been out checking bus stops again in Hull. We've now checked over half of the stops. Today was a struggle, on busy roads with lots of stops missing. Hedon road was very substantially rebuilt some years ago and I wonder if the old stops were not removed from the council lists and new ones added, although the consecutive numbers would not support this.

Keeping track of the stops was becoming a pain, so I knocked up an overlay for the stops in Hull. I offered the sources for this map to the talk transit list or to extend it for other areas but there's not much interest. I've sent the link to my contact in Hull council so he can see progress.

Something has been bugging me recently. The OSM-Talk mailing list can be very busy and often has interesting or useful threads on it, but lately it has been full of meaningless, circular, argumentative threads, usually pushed along by one person in particular. I'm beginning to dread the meaningless, rubbish that he replies with, to almost anything people add to the list. I wish others would ignore him.
Posted by Chris Hill at 16:46 1 comment:

Such a lovely place

We ventured out on a warm, sunny September afternoon to check bus stops in the Preston Road area of Hull. It is one of the roughest parts of the city, both by reputation and by record. The violent crime record is particularly grim, but on a sunny Sunday all was well. There were plenty of signs about, a few people drinking in the streets, a few youths out with their attack dogs on very short leads, a couple pushing a mini motorbike and an unregistered trail bike along the the street with two toddlers perched on them heading for a local disused railway line and two blokes with a piebald pony on a bit of waste ground, taking turns to ride it bareback using a rope bridle.

We plodded round, photographing everything as we went. It sometimes draws attention but not really much today, except for one point where a young chap followed the line of the upward-pointing camera and stared into the sky beyond the bus stop sign, looking for what we were photographing. I didn't like to point out that it was just a bus stop and we left him looking for UFOs.

We have now checked about 45% of the stops in the city. I'm going to send another batch of updates to the council for their comments.

On the way home we saw a buzzard very close to home. Although they're making a strong comeback in lowland Britain, so they are not especially rare there any more, it's still a pleasure to see one circling overhead.
Posted by Chris Hill at 16:32 No comments:

We dashed out on a busy day to grab a few bus stop checks. We managed a couple of dozen. The email lists have discussed how to tag some of these and one thing that came up is that some stops have a raised curb to assist people on wheels to get on the bus. I don't know the official name of this feature so I've tagged them as ramp=yes. I sent an email to the bloke in the council who's interested in these checks to see what they call them. It turns out that he knows a friend of mine too - it's a small world.

I need to review the photos for some of the stops I've already checked to see if they have ramps too. The tagging of stops might yet change by adding features, like a shelter or a ramp, to a bus_stop tag which is a contemporary way of tagging. I'm not sure about comma or semicolon separated lists though.
Posted by Chris Hill at 17:06 No comments: 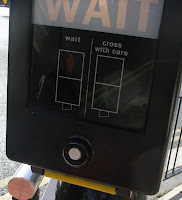 One thing I did find was a placebo button on a crossing. The junction is controlled by traffic signals, the crossing is over a one-way street, so the traffic signals for the crossing are part of the junction signals. There used to be a button on the crossing, but now the button has been covered over. There looks like there is a button, but it doesn't do anything. It just makes you feel as though you have requested the lights to change to make you feel better, hence it is a placebo button.
Posted by Chris Hill at 16:28 1 comment:

We mapped the last chunk of streets in Goole today. There's still stuff to complete for the town in details like some POIs and maybe some footways, but I'm going to leave it to someone else. I'm moving on to map somewhere else.

I have used a Yahoo email account for the OSM mailing lists. I wanted to keep all that separate from my normal mail. Thunderbird makes managing separate email addresses very straightforward, so all was well. Recently though, many messages were being delayed. The mail threads didn't make sense, I was getting replies to emails that I hadn't seen yet. When I added a message it was hours before I got it back again. So I set up a mail account on my testing domain which now seems to work very quickly. I just forget to change my name, so the lists got a message from 'osm' - not very helpful.

I did ask Yahoo about this, they sent me an email, which arrived immediately, so there was no problem apparently.
Posted by Chris Hill at 18:32 No comments:

We went to Goole today, to map a bit more of the northern part. I can say that motivation to map Goole is low - I just can't generate any interest in the place. I've mapped all sorts of places now, pretty villages, busy towns, grotty estates, open country and loads of housing estates, but Goole somehow in just not exciting.

There's more to do to finish the place so another visit or two is required. One should include a walk through the docks on a public footpath which might be interesting. I hope so.
Posted by Chris Hill at 17:40 1 comment:

We've been out checking bus stops again. We now have checked about a quarter of the stops in Hull. We have done some of the busiest roads so some gentle routes around quieter parts today made it easy. One of the stops is labelled as St Bede's church, so that helped add the name of a rather strange church that has no name board up but does not seem abandoned.

I have a sent a spreadsheet off to a chap in Hull City Council's transport team. It lists the stops we've checked and add the comments and issues, like stops with no signs, or no code on the sign or no stop at all. I'm interested what he thinks of our efforts - he has already said he wants to see it. I have not detailed the stops we have moved, mostly less than 20 metres, unless they were completely wrong such a the wrong side of a junction, or the wrong side of a street or on the wrong street. Most of the stops have been good, well labelled, and well positioned. There's just a lot still to do.
Posted by Chris Hill at 17:18 1 comment: 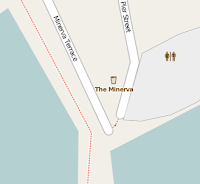 One thing I like about OSM is the immediacy of it. I heard today that The Minerva is reopening, which is against the trend for pubs up and down the country. The Minerva was a great pub, it had a micro brewery attached where they brewed Pilots' Pride and they also kept a wonderful pint of Tetleys too. They served good food and being on the waterfront it's a good location. I hope the revamped pub is as good as the old one. A few minutes after I heard this news the pub was re-instated to the map and a bit later the renderer had redrawn it.
Posted by Chris Hill at 17:17 No comments:

Some houses have alleyways running behind them. When the houses are joined together to form a terrace this forms the best way to get access to the back of the house. It seems the way to tag these in OSM is as highway=service, service=alley. In Hull and the surrounding areas these are known as tenfoots - they are usually about ten feet wide. Some streets have much narrower access to the back of the house that is really only as wide as a footpath and these are not tenfoots.

We went out to look at an area of Hull that we know have tenfoots, partly to see how easy it is to get access and partly to see what the extra detail might look like. Access was very easy. The tenfoots were all paved and only a couple of places had potholes. We didn't see many people, a few dog walkers, a few cyclists and a few children playing. I think I'll take tenfoots much more seriously, they add extra detail with little problem and they are not well mapped elsewhere. My only comment is that they might need to be rendered a little less prominently on some Mapnik zoom levels. Take a look and see what you think here.
Posted by Chris Hill at 17:59 2 comments: