I've been reviewing a few areas in Hull that we mapped a while ago looking for amenities we missed and especially looking for restrictions such as speed limits. We meandered through the residential roads in Gypsyville and moved on to Newington. Here we found three speed limit signs that were missing because a transition from 30 to 20 was not consistent with the signs we found. I've sent an email to Hull City council highways team to let them know - lets see what they say.

I sent an email to the East Riding council about a similar issue and got an automated reply, but no other action yet, so lets see if Hull or ERoY councils are quickest off the mark, of course being a holiday period this will probably slow things down. Councils also have a financial year that runs until the end of March, so if they are strapped for cash they mey well procrastinate until then. In the meantime I have added the speed limits as I think they are. Since they don't render on the main maps these don't show, and my own rendering program is not ready yet.

Some of the speed limit signs for 20mph zones are designed by local children to add impact to the sign - it seems like a good idea to remind motorists why they should slow down.

The economy is, apparently, riding to hell on horseback, so today we went to the poorhouse. This is not some festive Dickens story, but actually the home of Hull Kingston Rovers, or at least the road beside their stadium: Craven Park. We walked along the path beside and beyond Poorhouse Lane to the old railway line beyond. This has become a cycleway with a tarmac surface which heads out of the city eastwards towards Hedon (which we have yet to complete) and heads into the city. A little towards the city this splendid cycleway crosses under Marfleet Lane, the road goes over a fine arched bridge, and near here it become

There has been some talk on the mailing lists about tagging routes like this as abandoned railway lines, as they are. If anyone is in any doubt, a platform beside the cycleway is clear for all to see. I think this is a fine, except when there is a clash of names.

The new Talk-GB North has asked which of the northern cities should be the first to be completed next year, well it's too late, 'cos Hull's already done.
Posted by Chris Hill at 22:06 1 comment:

We have been adding speed limits and other amenities we missed on the first pass on a few local villages. I have been adding them using maxspeed=**mph. I know some people think that it should be added as km/h (without the units) but I disagree. The signs says 30 not 48.28032 so I add what I see, adding the units to distinguish it from km/h. Personally I wish we used km/h on our road signs along with all of the other metric units, indeed I'd actually prefer to use m/s, but I doubt that will ever happen. If there is a need to change to some other style of tagging I'll be able to do it en masse - it's much better that the maxspeeds are tagged.

Trying to find the point that a thirty limit ends we came across a serious bit of lumberjacking.

Brough is a village that has grown quickly. A large housing estate has been built over the last few years, and is still growing, even in the face of the current financial problems and even though many houses remain unsold. An old school has been rebuilt, a new supermarket and health centre have been built and a new pub has been opened, bucking the trend of all the surrounding area for pubs to close down, although the two other pubs in the village are struggling to survive. I recommend the ale in the Buccaneer and the food across the road at the Ferry.
Posted by Chris Hill at 18:39 No comments: 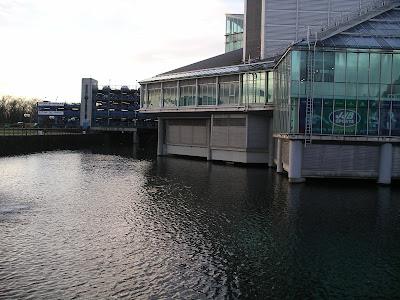 We also managed to do some shopping.
Posted by Chris Hill at 17:00 No comments: 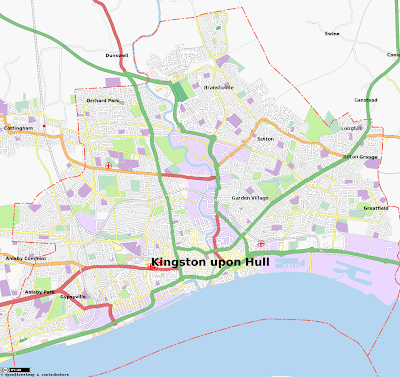