Gilberdyke is a village that we have ignored for too long, so we set off to sort it out. There's a lot of newish housing estates, with no real centre to the place. It used to lie on the A63 that connected Hull to the rest of the world. Then someone built the M62 and suddenly Gilberdyke was in the middle of nowhere, even the A63 is now the B1230.

There is a business park, actually an industrial estate, and I did some IT work there a few years ago for a company making really interesting plastic film {yawn}.

There was a new sports field out to the west, with vicious speed humps, and on the way out we spotted a wild tree mallow, which Jean likes. Her collection of wild flower photos already includes a tree mallow (Lavatera arborea), but you, dear reader, might like to see what one is so here it is: 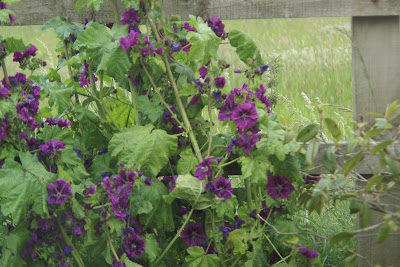 We have done a lot of mapping in Hull recently, so it is refreshing to get back into the countryside.
Posted by Chris Hill at 20:59 No comments:

With rain threatening I though we could add a bit more of the east side of Beverley Road in Hull. We found a few new residential roads, including a couple that were far from complete. Unusually, they had street names up even though the building work was still under way. Needlers used to make sweets, now the factory site is being made into a small housing estate, called Needlers Way.

Towards the end of our short session, we went past the Endeavour High School, just the kids were leaving. We wanted a photo of the sign, but a woman took our registration number - I think for taking a photo near a school. That needled me no end.

Yesterday I checked out the tiles I'd requested to re-render in Osmarender. I noticed that a cycle route (NCN 66) rendered as a red splodge over the roads at zoom 17. That doesn't make any sense - there is a lovely cycle map to show them. Names in the map were screwed up for example St. Mary's instead of St. Mary's. And then the areas of schools have an automatically inserted school symbol placed near the middle of the area. I have carefully drawn the areas, as best I can, and tried to place a school node where the building is. Now, suddenly, there are two icons, one for my node and one for the area. Now this lot really gave me the needle. Today the route splodge and the name nonsense are fixed, but not the school area.

I think Osmarender is quickly becoming the debug map, with Mapnik being the default 'official' render, so maybe these changes are to be expected, but as far as I can see these are unannounced, not discussed and just applied by someone. Most of the changes are good: quarries now render for example, but these changes suck.
Posted by Chris Hill at 16:51 2 comments:

We still need to add the landuse tags for the Wincolmlee area. We are getting close to completing half of the city.
Posted by Chris Hill at 18:58 4 comments:

Never trust what you think you know

On a damp Saturday afternoon, I thought a few bits or tidying up would help. We set out into Hull to check a couple of schools of Endyke Lane. I thought I knew their extent, but as usual it was worth checking. They occupy a triangle near the university, but in one corner there is a Jehovah's Witness church which I knew nothing about. One of the schools has changed its name too. We went to look at St. Mary's college, which is nearby. Again I thought it filled a space but some of the space is now a sport centre. A few photos and some way points help mark the edges, and a quick drive round the sports centre car park help mark the extent of the school.

Then we set off to Clough Road. It has a strip of warehouse-style shops surrounded by old industrial areas. It housed the first Comet pile-it-high in the country. A few short side roads help to judge where the retail ends and the industrial starts. It didn't take long, but a nice chunk of land up to the river Hull is now well tagged. Take a look.
Posted by Chris Hill at 21:09 No comments:

The sky looked black. All the jobs were done at home. The allotment was fairly tidy. So a spin out into the Yorkshire countryside seemed in order. I've been maintaining a list of the mapping progress through the East Yorkshire villages for many months. Some people have updated it too, but some people have put in loads of detail on the map, but the list has been left behind. I thought I'd check out some of the villages near Stamford Bridge. This is the north-west of East Yorkshire and has had a lot of work done over the last six months or so, but not by me.

We headed out to Low and High Catton and worked our way back home via Pocklington and Market Weighton. I wanted to check that the roads were all in place with names where possible and the amenities such as churches, pubs schools and the like were mapped. We added a few roads, especially a small estate in Full Sutton and a few minor country lanes. We added a few names to roads though it's surprising how many small villages don't have any street names on show. I wonder what their address is? We found a road called Feoffee Common Lane, which is a great name.

We followed part of the national cycle network route 66 on and off, adding a couple of missing country lanes it uses. The section from Market Weighton to Stamford bridge is now complete.

Oh yes, we're nearly halfway through the villages in East Yorkshire. Take a look.
Posted by Chris Hill at 19:28 No comments:

Buoyed up by the progress with the North Hull estate we decided to do some more. It's a bit of a slog, but the progress is visible. Now there is not much left to complete the estates, and with that almost all of Hull to the west of Beverley road (the main road heading north out of the city) will be complete. Take a look. 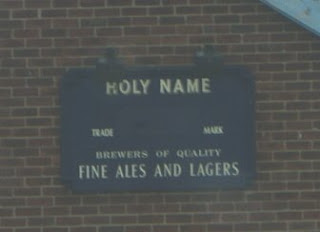 One point of confusion was the Holy Name church on Hall Road. It's a modest, rather unassuming church which I couldn't see much of sign for. The building right next door looked like a church hall so Jean snapped a photo for the name. When we got home I took a good look at the photo and it wasn't quite what I expected ...
Posted by Chris Hill at 13:24 No comments: 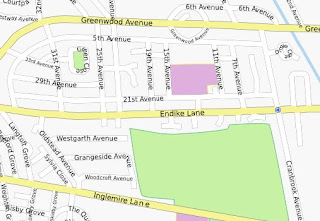 You can see the map here.
Posted by Chris Hill at 19:47 No comments:

We added a few more streets in Hull, especially around the university. I thought it might be a bit difficult to know the boundaries of things, but it was fine. The university has a girls school (Newland) next to it, but the school is beautifully framed by service road. There is also a police sports ground in the space too, but once again it has a framing road round most of it. The hi-tech business park was enclosed by a road and a stream, so it all went well.

We added some newish residential roads that sit where a teacher-training college used to be. A few more simple roads and we were done.

There are some other sports grounds and a couple of schools for special needs kids to add. Access is difficult, but the roads around should frame them too.