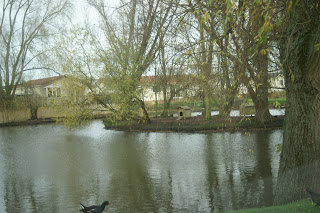 A few service roads and buildings on an industrial estate and a couple of extras added, including a newly-built gated community that I sneaked into while the gates were still open for the builders rounded off the visit. On the way home we found a new 40 mph speed limit on a very quiet, narrow and twisty road that is often used by cyclists and horse riders. There was also a bunch of notices up about compulsory purchase of land to the south of Beverley where a much talked-about southern bypass is in the planning stages. It seems a bit bold to compulsorily purchase the land when the planning has not been agreed and there is still, therefore, some debate about the exact route.
Posted by Chris Hill at 16:23 No comments:

We took a ride to the top of Garrowby Hill on the A166. It was a bit wet in the unforecast rain, but it stopped long enough at the top of the hill to not see the view for the murk. This is the highest point in East Yorkshire at about 245m. We did find the trig point hidden away in the grounds of a small water works. I added the runaway lane on Garrowby Hill, but I don't know what others tag these as. I'll probably have to change the tag when I've worked it out.

On the way home we passed Market Weighton and noticed that the bypass has a new name: Giant Bradley Way. William 'Giant' Bradley was the tallest British man ever recorded at 7' 9" (2.108m). Market Weighton, where he was born and lived, is trying to use the Yorkshire Giant to promote itself as a centre for tourism. Which is nice.
Posted by Chris Hill at 16:51 No comments:

I've been out checking names of OSM roads. ITO World's OS Locator tiles help to find the places where OS Locator and OSM don't agree. Often on rural roads the names are missing from OSM because there is no name board, but sometimes there are name boards and the difference is because OS Locator does not agree with the name board.

Normally I don't look at Google maps - I'm not interested. Their marking scheme clearly is different from OSM because farm tracks show up as roads for example. When I did look at a Google map page that someone linked to I noticed that an OS Locator name that is wrong on the ground appeared in Google maps. Recently I've checked a few more and whenever OS Locator disagrees with my findings on the ground, so does Google maps. In a couple of occasions OS Locator disagrees with OS StreetView and Google matches OS Locator. I have also used Google's StreetView to look at the name plates where they exist and sure enough the name plate disagrees with the road name on Google's page. Google have the photographs to show the real, on-the-ground names in the StreetView system, but they haven't used them.

Some people might say that the OS names are correct and the name boards might have errors, but I strongly disagree. When the council replaced some damaged name boards locally and one was wrongly spelled, there was a fuss from the people who's road name had apparently changed. They insisted the council put it right, and the council did replace it, though it took nearly three months. My point is that if a name is wrong on the ground people will have it corrected, but if the name is wrong in an OS database no one complains so it doesn't get corrected.

When it comes to Google's naming of roads, the only conclusion I can come to is that somewhere in the supply chain of data that Google uses, OS Locator or some similar OS data is used. Google, or one of their suppliers may have an agreement with Ordnance Survey, but if they are using the open data I wonder why they don't attribute OS?

By the way, why did OS choose "StreetView" as the name of one of their hurriedly-put-together OpenData when Google already used the name for a quite different product?
Posted by Chris Hill at 14:21 1 comment: