I've seen a report that shows the total erosion along parts of the East Yorkshire coast. The coast is one of the fastest eroding coastlines in Europe. The average rate of loss is about 2.5 metres each year, but last year there were unusually large losses in a few areas. South of Withernsea the cliff receded by ten metres. Near Waxholme seven metres disappeared.

Holderness is a rich agricultural plain east of Hull. The clay it is made of was deposited as the last glaciers melted about 10,000 years ago. As the sea level rose again separating England from modern-day Netherlands and Denmark the soft clay became the new coastline. The cliffs range from a metre to tens of metres high, but the action of the sea easily undercuts the cliff and then causes collapse. The very dry year last year may have contributed because the clay shrinks as it dries out, leaving fissures that make collapses easier. Most of the coast is not, now, defended so these loses will continue, but probably at the average rate overall.

Left to itself, in about 10,000 more years, the plain would probably erode back to the old coastline which was a limestone line marking the edge of the Yorkshire Wolds from Flamborough Head to Hessle on the bank of the Humber.

All this erosion makes keeping the OSM coastline up to date is hard work.
Posted by Chris Hill at 19:12 No comments:

Homogenised data? No thanks

I follow the changes made in the East Yorkshire area. Andy Ayre created a twitter feed for the area which generates tweets as osmeastriding. AndrewArm creates an RSS feed for the area too. Then there is the ITOWorld tool which is helps me look at the editors for a selected area.

Andy Ayre's twitter feed is based on a rectangle that encloses the county, so it also includes York, part of North Yorkshire and part of northern Lincolnshire too. It is very quick so edits appear only a few minutes after they were made and I check it every day. Andy's algorithm looks for changesets that fall within the rectangle, so big changesets that span the county are ignored whether objects in the county are edited or not.

AndrewArm's RSS feed is based on the polygon that describes the county and so it is more focussed. It is up to a day behind the edit. It does, however, show any edits in the county, including changesets that cover bigger areas than the county, so-called big edits.

ITOWorld's system will be familiar to many. It allows you to choose a rectangle to monitor and provides an RSS feed for changes in the selected area. This is a day or two behind the edits and the size of rectangle is limited and is much smaller than the size of East Yorkshire.

Monitoring an area reveals new mappers. Once they have made a few edits I usually send them a message saying 'Hi' and offering info or help. Newbies often want to check something or ask how to do something.

Monitoring also shows up vandalism. Speedy action means vandalism can be reverted without much risk. Reverting a vandal's edit means he may be dissuaded from doing it again, but at least the harm is limited.

Another thing that monitoring shows up are mass edits. Recently there seems to be a spate of them and some are harmful and annoying. When someone replaces a misspelt tag that is helpful. Changing Name=* to name=* or buildng=yes to building=yes would both benefit the object. However that is not what many mass edits are about. Some seem to be about homogenising the data, replacing the value part of tags with something generic. Sometimes a tag is removed and a replacement tag is added in its place.

I challenge the people who fire off these homogenising edits, which I dislike. The commonest excuse is that the wiki says the tag should be like this. This is infuriating. The wiki is full of controversy with edits chopping and changing the meaning of a tag back and forth. The open part of OpenStreetMap can be interpreted in many ways, and one way is that the tags that are used are open, that is any tag key and value is allowed. I also hear that TagInfo shows that value x is the most popular so every object must be changed to x. What TagInfo actually shows is that there are many uses of the key and that x is not the only way to use the tag, so why should they all be forced to be the same?

The second reason quoted is that how can the data be used if it is not consistent. Ontologies are mentioned. The odd thing is that people who say this are not the people who use the data for rendering, routing, analysis or whatever. The OSM data as derived from the API as XML (or pbf) needs to be processed to be used. That processing often loads the raw data into a database or processes it into a working file and that loading process can include catching a range of values that are useful for the render, analysis or whatever. If the variations of the key values are useful then they are used, but if some mass edit has flattened out the data into a monotonous grey, then those differences are not available. This processing will be a few lines of code, written once and used over and over without harming the detail at all. This is how landuse=cemetery and amenity=graveyard can be treated as the same thing or treated differently.

I know that a carefully chosen tag that gets splatted into some other meaning by a thoughtless mass edit is annoying. If that annoyance persuades a mapper to stop contributing to OSM that is a problem. Our most precious resource are our mappers and if a mass edit risks losing just one of them then that is a very serious indeed.

I have been accused of not wanting objects I created being changed; of being too protective. I'm not and that misses the point: OSM is a wiki. The objects are all open to edit every day. I just want those edits to improve the quality not squash it out.
Posted by Chris Hill at 19:59 6 comments:

Yesterday we went to see the plans for an exciting new development in Hull. Kingston upon Hull sits alongside the Humber estuary and has docks along much of this waterfront. Some have been changed over the years - one has been filled in and turned into a sunken garden in the city centre, another filled in and and turned in to a housing development, one has a large shopping centre built over it on stilts, one has become a marina, but the biggest ones remain as commercial docks run by Associated British Ports. ABP have announced plans with Siemens to create GreenPortHull, a factory to build offshore wind turbines to be installed in the North Sea. The existing Alexandra dock will have the companies who use it moved to the next dock, King George dock, so that the whole of Alexandra dock can become GreenPortHull.

I talked to a helpful guy from ABP about the development and explained about OSM, which he seemed genuinely interested in. I decided to use his description and his flyer to create a mock up of the new GreenPortHull.I first rendered a small map of the way the dock looks now: 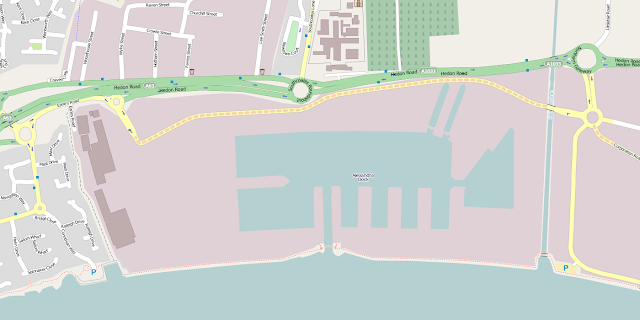 I then copied the data and edited the copy to change the shape of the dock area, alter the road, remove the footway and add the new cycleway around the north of the dock. I added a few captions (by cheating with adding some place nodes) and rendered the new map. 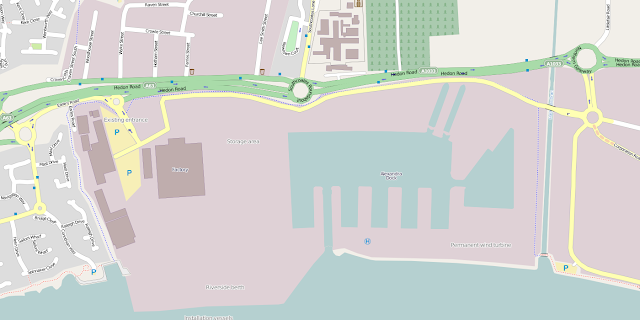 The result is interesting, and done in a few minutes could be a bit slicker, but with more time it could easily be great.

The development is almost universally welcomed in the city which should be building turbines in three years.
Posted by Chris Hill at 19:41 No comments: 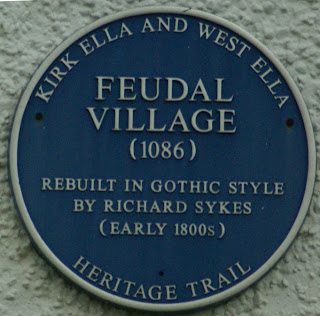 If you have plaques (blue or otherwise) near you to commemorate someone or something why not add them to OSM and openplaques.org. Then we can all argue over agree what tags to use.
Posted by Chris Hill at 17:19 4 comments: