We needed some compost for potting up winter plants and I know that a new link road is being built near to the garden centre, so I thought I'd check it out. I know the road is being built because the A1079 has a frustrating new 30 mph speed limits and speed cameras on it. A roundabout is being added to help the link road join into the main road. The link load is, I think, only going to Swift caravans to help them move their raw materials onto their site and especially move the large mobile homes and caravans they produce off site, directly onto a substantial road and not through Cottingham village. The new roads cuts across North Moor Lane, and would have provided a short cut into Cottingham from the A1079, something the planners want to avoid, so North Moor Lane has been cut in half to prevent this rat-run being created.

Part of the reason I looked at this area is that a newbie had added a huge stretch of 30 mph on the A1079 in response to a Skobbler bug report. The 30 mph limit had already been added, but rather than accept that the editor just added extra 30 mph areas. Bug reporting is a great idea, but it would be nice if people would actually visit the reported area before 'fixing' it. I have sorted it out now, but the new roundabout will still need adding when I can get a GPS trace around it.
Posted by Chris Hill at 16:22 No comments:

A little bit of mapping 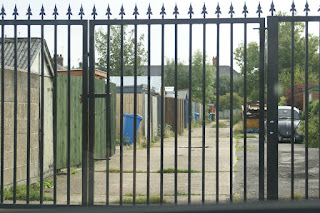 It's been a quiet mapping time, but today after a discussion about some areas of Hull I found myself checking out some of the ten foots off Spring Bank West. A ten foot is the local name for an alley. They run behind rows of houses which are often terraces so these ten foots give access to the back of the houses. The land that fronts onto the ten foot are almost all garages, maybe at one time it would have been a garden. A few of these alleys have been closed to public access with gates. In fact I have no idea of the access status of an ungated ten foot. They tend to be untidy and unkempt and now the wheelie bins just make things worse.
Posted by Chris Hill at 21:38 1 comment: