The slog is over

I've been slogging through the roads in East Yorkshire. Sometimes literally and sometimes by looking at old photos from previous surveys. East Yorkshire now has a complete list of named roads compared to the OS OpenData Locator dataset. It actually has many more of course, there's heaps more detail in OSM than in the OS Opendata datasets. On the other hand OS has masses more fine detail than OSM, it just isn't available as open data.

The other part of the slog, though much simpler, has been to remap anything that will be lost or badly affected by the licence change process. All of East Yorkshire's and Hull's road networks are safe now and almost all of the footpaths, tracks, woods, lakes and other countryside details are safe too. Finding and contacting lapsed mappers has been the biggest part of this success. Everyone I contacted has agreed to the new licence (why wouldn't they?) but a few took some finding.

Now I can go back to pet projects, such as creating a tourist map of Hull with all of the features visitors might like, from museums and galleries, hotels and guest houses, pubs and restaurants to walking trails and cycleways. Some of these need extra survey work and the site needs designing ...
Posted by Chris Hill at 16:21 No comments: 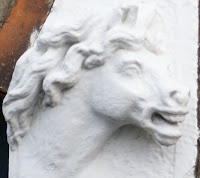 Worth a journey out in the snow.
Posted by Chris Hill at 17:02 No comments: