I've been checking bus stop data that was loaded from the National Public Transport Access Node (NaPTAN) database, donated by the Department for Transport. Christoph Böhme has created a viewer called NOVAM and kindly added a colour scheme based on my choice. You can see it here. I wanted to try it with IE since the people in council Transport Offices will probably use IE.

My laptop came with Vista. I loaded a dual boot Ubuntu which I use all the time. To try out IE I restarted the machine in Vista. I haven't used Vista for weeks, so the virus checker had expired. I decided to delete it and add a free one. Whilst doing this the Windows update process had downloaded umpteen updates so I foolishly agreed to install them. I had installed the Thunderbird profile on a folder on the Windows NTFS drive so I could use email on both Windows and Ubuntu and see the same messages etc. That was my downfall. At some point windows must have hibernated, I didn't realise, restarted the PC in Ubuntu, did some stuff in Thunderbird, then restarted in Vista. Vista now recovered my running email to the way it had been and threw away my newly downloaded emails.

Now I haven't lost much, but it has just been the last straw. I hate hibernation, but it doesn't seem easy to turn off in Vista - part of the Micro$oft policy of we know best, we'll take your PC that you paid your money for and make it work our way even if you don't like it. So Vista is no more and how good does that feel.

I do have another PC (well a few actually) and there is XP on one of them, so I'm not without access to Windows, so now I can try NOVAM in IE which I didn't actually get around to in Vista in the end anyway. I hope it works.
Posted by Chris Hill at 15:18 1 comment:

We had a break from bus stops and went back to village mapping. The village of Wilberfoss is alongside the A1079, which is not my favourite road, but once you're in the village the busy road between Hull and York just disappears. We followed the twists and turns of the older part of the village with its extensions into newer stuff. There's a beck, a pub, a school, a church and it's a pleasant place. The beck is quite small but there's a chunky bridge over it which seems way too big. I traced the beck from NPE, I tried the new 1:25000 maps but they didn't load after a few minutes so I gave up. This internet connection is variable, so it might have been us, but NPE loaded almost instantly.
Posted by Chris Hill at 17:52 No comments:

I've sent another batch of bus stop checks in Hull to the city council. I'm a bit disappointed about the lack of feedback from the transport team. The bus stop data is, however, much better than it was, with stops better positioned, missing stops removed and extra stops added. Some of the NaPTAN fields have mistakes. I have sent the issues to the council transport team so they can update the NaPTAN data at source. I haven't changed any of the real NaPTAN fields because I expect this might be reloaded from another NaPTAN update and then any fields I change would be overwritten.

I am looking forward to finishing this and then moving on.
Posted by Chris Hill at 18:54 No comments:

We went out to verify some more bus stops in Hull. The stops have been loaded from the NaPTAN import and have generally been quite good. They are labelled in a straight-forward way and generally their positions have been pretty good. The NaPTAN data includes a bearing showing the direction a bus will leave the stop, in Hull's case this is the 8 cardinal points N, NE, E etc. These bearings are the biggest single error, and it's easy spot. I make a note of such errors to send to a chap in the council so, hopefully, he will update the NaPTAN data from what we find. 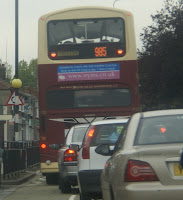 We drove up and down Spring Bank today. Driving looking for stops is tricky, but in the slow moving traffic today it was very easy, we stopped alongside most of the stops in traffic which was heavier than normal because of road works. It's generally too far to walk between most stops - it would take too long - but one problem with driving, rather than cycling, is that you get hung up on buses. If I stop at a bus stop for Jean to photograph the sign etc., but a bus is following us we need to vacate the stop before the bus arrives and evicts us. If we end up following a bus we need to find a place to stop and wait for the bus to clear the stops.

I wanted to clear the Spring Bank area this week because next week it will be very busy because Europe's biggest temporary fairground arrives in Hull. It is a great fair, there are the usual small stalls and fast-food stalls and lots of big, fast rides which help you see your fast food again.
Posted by Chris Hill at 16:54 No comments:

So, where do I stand?

The calls for a leader are well meaning but naive. SteveC has been held up as such a leader but is someone with vision the right guy to go through the minutia of shield shapes, shop types, road colours, surface type etc? I don't think so. Is it likely that one person can have the knowledge and the foresight to make binding decisions that will apply across all countries and legal jurisdictions? I very much doubt it. Will one person understand the reason that everyone contributes, so what tags really mean to them? Certainly not.

In spite of a few people shouting it down, open tagging works very well. A consensus has emerged about almost everything. Some people want that consensus carved into stone tablets so no tags outside of the 'rules' can be used. So what will they do to the people who don't follow these rules? Throw them out of OSM? The outcasts will then just take the freely available data and start again (and I'd join them). If you don't throw them out then the only other way forward is to change their tags and start an edit war.

The calls for consistent tagging often mention how much harder it is for software using the data to make good use of inconsistent data, yet these people don't seem to make use of the data - the people who do use it occasionally mention that it really is no problem.

it has been said that some people don't map an object because the tags are not clear. I wonder how much real tagging in the real world these people have done. The real work is gathering data from the ground. It is easy to change a set of tags later rather than go out to an otherwise well covered area to gather the data again for a feature you deliberately ignored.

Some people favour Taglist. This shows the number of times a tag is used allowing a consensus to form, but, like any kind of evolution it has no guiding hand. We get convergent evolution where two different sets of tags mean the same thing. We get broken tags where no thought went into them so they don't stand the test of time.

The biggest problem area is the lousy wiki that is used to document things. Creating wiki pages is easy. Creating a useful wiki page is much harder. Creating a wiki page that is useful and stays useful after various people have tinkered with it is very, very difficult. Creating a wiki page for a new tag is easy. Assimilating the comments to make a tag better is tedious but can be very productive if it is done well by someone willing to accept ideas and not just push their own agenda. The final voting system to then adopt a tag is meaningless. So few people vote compared to the number of active mappers that a majority is worthless and sometimes ignored anyway. Once the tag's wiki page is promoted to Map Features it gets changed later without voting anyway.

Open format tags are very useful for our world. Very few things in life are black and white, so extreme views like 'closed tag lists vs anarchy' really don't help. People contribute to OSM for many, many reasons and all are equally valid. Their reason, their culture, their language, their temperament, their environment, their software and their experience all flavour the tags they use and the things they tag. If we close the list of tags much of this will be restricted.

Do I have any answers?

Create a tagging list to get the issues with tagging off the Talk list. Moderators on busy lists should remind people to exercise restraint, both in not just commenting blithely on every message and also not repeating the same argument over and over. Scrap voting on tags - it gives a false air of importance to the process. Scrap the wiki for tag documentation, replace it with some solid tags in a harder-to-edit form and emphasis Taglist and open format tagging.

These are my ideas. They are not binding. In no way do I intend these to revoke anyone's human rights. You are free to ignore them and/or express ideas of your own, but please, please don't start arguments on OSM-Talk.
Posted by Chris Hill at 12:01 3 comments: