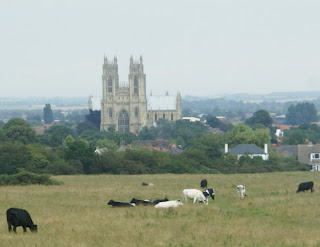 We've returned to Beverley, but it is still not finished. After the last couple of visits to the somewhat tatty housing estates, today we worked around the Minster and further west. Beverley has a fine, large mediaeval church that rivals some cathedrals, but it is a minster so Beverley is a market town not a catherdral city. The photo is the view of the Minster from the Westwood - a large common with a golf course slotted in it. The greens have little fences around them to keep the cows off them.

Beverley is the county town of the East Riding of Yorkshire - sort of the capital of East Yorkshire. There was some talk on the mailing lists about adding a tag for capitals so they render better. I think adding a tag for a capital is fine - more data is usually good - but I'm not sure how the tag might work: capital=yes (capital of what). Maybe as part of a relation, but that would cover a large area ( relation marking Texas just to show the capital?). The is_in tag might be useful, but I still don't see how it marks a capital and it's not used consistently. Then there's rendering. Why show Beverley just because it's a county town rather than Bridlington or Goole. Population size or land area make more sense to me.

I ran into a long-standing problem again today - private roads. There's a road off Long Lane in Beverley called Old Manor Lawns. It has signs saying "Private - no entry without an appointment" and "Private no through road". I didn't go down the road to get a track to add it as a (access=private) road, so it's not on the map. I sometimes venture down a private road to get a track, but not when they have such a determined set of signs, so how to map it?

T@H maps are sometimes a bit of a pain. Requesting a render from InformationFreeway is sometimes hard work, but the renders are much quicker and, as always, invaluable as a check while the route is fresh in my mind. The Wiki says the T@H server needs a reboot - I could have flown to California to reboot it by now! The work Spaetz has done to manage the T@H server has helped the upload process, but serving tiles seems too hard work for it. The great thing about having so many people involved is that someone will contribute the answer. I just wish it was me - my 30 years experience is in all kinds of computer systems and languages, but not for Linux.

Beverley still needs a couple more visits at least.
Posted by Chris Hill at 17:17 No comments:

A week has passed 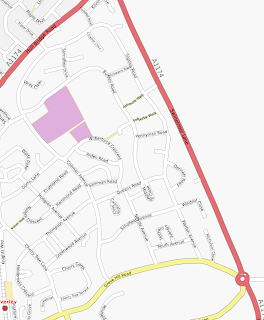 We have been busy with all sorts for the last week - not least waiting for a plumber. After four visits they found the problem, ordered then fitted the parts then fixed another problem they had caused and the boiler works again.

So a week after our last foray, we went to Beverley again to continue where we left off. The map looks pretty good now, but there's still some other parts of the town to complete.

Beverley has a local reputation as a smart, market town, with expensive shops, but the estates we've mapped were rather run-down with people hanging around, drinking in the streets.
Posted by Chris Hill at 18:41 No comments: 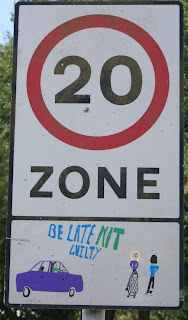 We had a brief foray into Beverley. It's an ancient market town with some narrow streets in some parts, but we did some of its housing estates off Grove Hill road. (Other map makers take note Grove Hill, not Grovehill).

Some of the residential roads have a 20mph limit and, in common with many roads in Hull, they have children's artwork built into the sign as a way of reminding drivers to take it easy. Of course, if they forget the speed bumps get them, but these are well made that reward slow driving with a gentle bump unlike some. I'm not sure this picture is the best one I've seen - there are many designs - but the idea is a good one.

When I got home I began to wonder if these are living streets rather than residential; I'm really not sure.
Posted by Chris Hill at 17:10 1 comment: 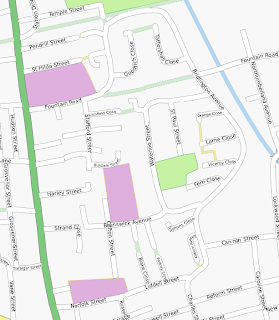 We've had a couple of sessions in Hull, both in housing estates. The first, last Friday, was in the Fountain Road estate. It's a not very aptly named. It used to be an estate either side of Fountain Road, but now its an estate ringed by Bridlington Avenue. Most of the road that was Fountain Road is now a cycle track without a name, but it has cut the traffic out from the estate. 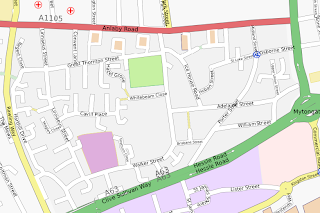 On Monday we revisited the Ice House Road estate. We had done some of this before, but not in any detail, so we filled in the detail today. There are some blocks of flats and we discovered a service road that ran around them right against the building, so getting a track was easy. Reception was very good today, so canyoning aside next to the flats, the tracks seemed very good.
Posted by Chris Hill at 20:03 No comments:

I've been keeping a list of the places in East Yorkshire in the Wiki. I reckon that more than 50% of the villages in the county have been completed, but because it's a big county that still leaves 129 to do. This is an estimate; I took the first list from Wikipedia which was pretty good, but there have been various adjustments when the real situation is taken into account. Many villages are historic and don't exist any more, some were added from NPE and have since disappeared. A few have been absorbed into a bigger nearby place. Some new places have appeared too, most were just not in the original list but a couple are newly named places.

Today we completed eight (small) villages and added miles and miles of country lanes. Three of the hamlets were added to the map for the first time. All of this is in the plain of Holderness to the east of Hull. (Link to the map should go here).

I wanted to post a link to the area, but the t@h map just will not refresh and Mapnik will not include the new stuff until later this week. I hope the t@h server gets its new disks soon; not being able to see the work you've done is a recurring theme in the diary pages and is clearly putting people off contributing. I understand that the real value is in the API and the data, but most new contributors expect to see a rendered map, nicely updated with their work and quickly on demand. I like to check my work soon after I have uploaded it and it is fresh in my mind too.
Posted by Chris Hill at 20:13 No comments: 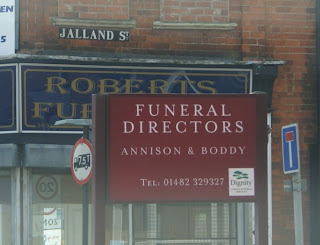 A hot, sunny day tempted us out into the Yorkshire Wolds. This is a stunning part of the country that is widely ignored. It is very quiet with rolling hills, little wooded valleys and quaint little villages. 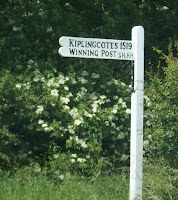 We set out to join up the country lanes around Warter. On the way we added a part of the route of the Kiplingcotes derby, which is England's oldest continuously run horse race on the flat, run since 1519. It is about four miles long and run in fields, on tracks and on country roads. There is more for to map yet, then I'll add the route.

The views in the area are superb. 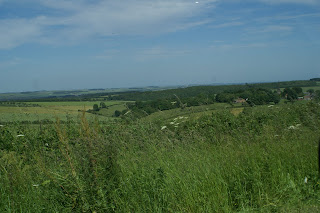