Monty Python had it right. Some people really would pay to sit in a room to have an argument. The modern day equivalent of the Python's Argument Room would be a chat room, a blog comments list or a mailing list and people don't even have to pay. Here they can provoke others into spurious, circular arguments that get nowhere and some people clearly just love it as a sport.

The OSM-talk mailing list has become the pitch for this sport. I'd like to see a bit of proactive effort by the administrators. When someone is repeating the same old stuff, over and over or when their posts exceed a certain percentage of the total posts, the administrator should ask them, off-list, to be a bit more restrained. If that doesn't work then a public naming followed by a suspension or ban might be in order. Let's get the list back for useful exchanges and banish the trolls.
Posted by Chris Hill at 12:11 No comments:

We went out today to take a look at a site in the Yorkshire Wolds where there is some ridge and furrow marks in a field. There are a few places in East Yorkshire like this, though they tend not to be quite as prominent as areas in the Midlands. The sun was quite low in the sky and the shadows cast across the field were just about good enough to see the furrows.

These marks were made by ploughs that couldn't turn its face round like modern ploughs do. All of the earth that was turned over by ploughing over very many years formed a bank in one part and a trough in another. The only ones that survive today are where the land has only been used for grazing since medieval ploughing stopped and not touched with a modern plough, so most of these marks are hundreds of years old, some over a thousand years old.

I could put it on the OSM map (I'd have to invent a tag but so what), but I choose not to because such archaeological sites get pillaged by treasure hunters with metal detectors so I don't want to encourage them.
Posted by Chris Hill at 15:52 No comments: 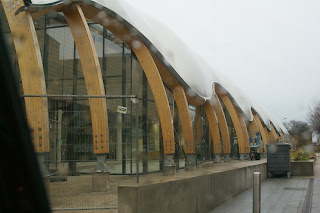 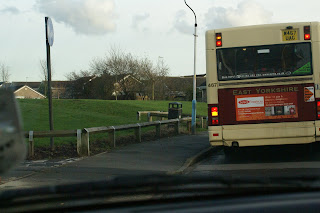 We have been checking a few bus stops in East Yorkshire recently. One thing I find odd is the idea of a CUS stop. This seems to be a customary stop, where buses might stop. The key thing seems to be that there is no bus stop sign at a CUS stop. We were checking such a stop when a bus rolled up and dropped off a passenger. That confirmed that there was a stop there, but I find this odd. Why have a stop that's deliberately not marked with a sign? No one benefits from this. I just don't get it.
Posted by Chris Hill at 15:51 2 comments: