Following a project of the week earlier this month to add Memorials we added a few. In order to some idea where there might be war memorials we could survey I googled 'war memorials' and came up with the UK National Inventory of War Memorials which is supported by the Imperial War Museum.

I expected to find a few memorials in Hull, but there were pages and pages of them. Looking closer, many entries were individual memorials attached to grave stones, so I'm ignoring these. Most of what remained were street shrines, which I'd not heard of. The database has a field to enter any reference relating to each entry and most of the Hull ones seem to have come from a single book: HULL STREET SHRINES AND ROLL'S OF HONOUR (sic) by M&M Mann.

I tried to find out more about the book and discovered it was in the local library reference section, which is part of the Hull History Centre. The Hull History Centre is a friendly place, allowing laptops in and providing easy access to their books and map and a complete contrast to the East Yorkshire Treasure House which is plagued by stupid rules (you need a PAT test certificate before you can take a laptop in for example). We went to take a look in the History Centre.

It turned out to be a bit of an odd book. There was no reference information about the book at all, no publisher, no ISBN, no copyright or publishing date and it had been bound by the Hull Library Service. There were indeed a long list of the street shrines in the book, but almost all of it was a series of copies of newspaper cuttings with some that are hard to read being transcribed. These clippings were mostly about the ceremonies to mark the erection of street shrines to commemorate local men who had been killed in the 1914-18 war. There were also articles about how these shrines didn't mention all of the people killed, mostly because they were erected before the end of the war, so more people needed to be added by its end.

One important thing that the web site authors seem to have missed is the introduction. Here, in a bit of a ramble, Malcolm Mann explains that all but six of the shrines no longer exist, for a variety of reasons. He describes the six shrines that do exist, so today we set off to look for them. After searching for four of them in the rain and with the daylight fading fast we gave up. There was no sign of the shrines we looked for. I was expecting to be able to add these to OSM and produce a simple overlay to possibly help the web site. I can show conventional war memorials so maybe that will be useful.

I contacted the web site authors to see if they need any help in our area, but I've not had any response yet. I wonder if they want to include these shrines since they don't exist on the ground and many have not done so for nearly eighty years.
Posted by Chris Hill at 18:21 1 comment:

A wonderfully crisp and sunny afternoon drew me out into a few local villages looking for more war memorials. The three we found were all in church yards, one being the isolated one at Rowley. Rowley is a very small hamlet, which has a rather nice country house hotel, Rowley Manor surrounded by a farm and a few houses and the church of St Peters. The actual civil parish of Rowley is quite large and takes in the village of Little Weighton. We walked around the perimeter wall to get a trace for it and looked out over the strange lych gate. It is has a path in the church yard to it, but outside of the boundary wall there is just a paddock.

The war memorials are easy to spot because they have the wreaths of poppies on them. I've contacted the UK National Inventory of War Memorials to see if they want to include any mapping on their web site, but I've not had a reply yet.

When I came to enter my traces into the OSM DB, I used JOSM and had a slippy map overlay for the Ordnance Survey OpenData. The area I was looking at shows how badly misaligned some of the OS OpenData overlay is. I wanted to add the churches but the (crude) building outlines in the OS overlay were way off according to my traces. This is a common and consistent problem, both with my current GPS and its predecessor which fell to bits. The overlay always shows objects further south than my traces. I trust the traces more than I trust the overlay's position. In the end I traced a church outline to get the orientation right and slid it to a more reasonable place based on my traces.
Posted by Chris Hill at 16:20 No comments:

The project of the week has not really rung my bell before, but this week it is to add war memorials, so I added a few local ones (sorry for the quality of the photos, but the weather was bad and the light poor).

I heard on the local radio that a large development is being proposed in Brough, a few miles from my home. There was a display in the Brough library about the proposed new homes and commercial area, so I thought I'd go and take a look.

Brough has been very substantially extended over the past ten years. When I was at school there was a very large area of greenhouses given over largely to growing tomatoes and cucumbers and in the summer there were always employment opportunities picking the fruit for anyone who didn't mind being roasted alive in the greenhouses and scratched to bits on the cucumber plants. All of the glasshouses, warehousing and packing sheds have long ago been demolished and a huge new housing estate and a school built there. There have been other new facilities built too, such as a supermarket, health centre and, bucking the national trend, a pub. One of the new facilities is a library and community centre where the plans were on show.

The plans were laid out on display boards, with black and white maps showing Brough and the new roads and building areas sketched over as coloured blocks. I can't reproduce them here for fear of breaking the developer's copyright. The maps were very old OS ones. They showed the market gardens as though they still existed, with the existing, new estate blocked in colour which made it look part of the development. All of the existing, new facilities and some existing roads were drawn in as though they were to be added by the developer. The development that really is to be added is largely on open fields but it is partly on the airfield currently owned and operated by BAe. This is fiercely guarded and is not available for private aircraft to use, so only a few aircraft use it each week. One interesting part of the proposal is to build a new supermarket. Tesco already have expressed an interest in building a supermarket near the A63, not far from this proposed development and the developers are latching on to the hostility to Tesco's plans by saying that their supermarket would be instead of Tesco's planned one.

I have no particular objections to the development, but it is interesting to see how maps are being used to portray a developer's specific agenda and attempt to put them in a good light. As to replacing Tesco's proposal, well Tesco have the cash and planning experience to usually get what they want.
Posted by Chris Hill at 16:18 1 comment: 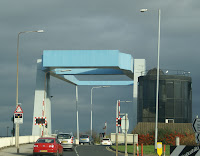 When I look at at KeepRight it flags up all sorts of things including where a road crosses a waterway when there's no bridge. There is a small waterway running through Hull called the Beverley and Barmston Drain. I wasn't sure that all of roads that pass over it did so on bridges rather than it simply running through a culvert of some kind, so we went to take a look. The simple answer is there were bridges everywhere, though the pictured one is actually one we already knew about.

As usual when we go out looking for one thing we discover something else. In this case we saw a new industrial estate which is still being completed and a housing estate that is much bigger than it was the last time we checked. The industrial estate didn't have any road names nor a name for the estate, but I expect this to change as the place is finished. The housing estate (pictured) is also still being developed but at least has a road name and also plenty of mud.

The autumn colours in the trees and bushes have been great this year and in spite of a windy day there are still lots of leaves to be seen.
Posted by Chris Hill at 17:33 No comments: