In my last post I made a mistake. The roads I thought I had added in the Hedon area were really in Preston. If you look at the map, you might see why I made the mistake. The boundary between the town of Hedon and the parish of Preston is clear and what looks like part of Hedon falls plainly into Preston. The quickest way to get to the rest of Preston is through Hedon.
Posted by Chris Hill at 22:22 No comments:

A short trip out today to the east of Hull, into the area known as Holderness. We were looking to find some new developments in Keyingham, Thorngumbald and Hedon. The two in Keyingham and Thorngumbald were very similar and slightly unusual design of houses. They look to be by the same architect. The upper level only has skylights in the roof, but the eves are half a storey above where I'd expect them to be.

In Hedon the new road is part of a bigger development. The roads don't all have names yet, but I added them with a note anyway.

As usual, a survey turns up extra stuff. The extra roads, a new 20 mph speed limit, a playground both in Hedon and Keyingham, a recreation ground not added before and a hotel too.

I added the details I saw, tweaked a few roads to give a better alignment with Bing, now I have GPS tracks to confirm how well aligned Bing is and got tempted into adding a few buildings too.

There is a lot of discussion at the moment about the imported Cadastre data in France. I don't know how good the data is or how well it is being interpreted as it is imported (wall=no seems an odd tag for a building)  but I'm glad that my contributions to OSM relies mostly on a trip out to see what is really there, backed up with imagery and OpenData. It is what makes OSM fun for me.
Posted by Chris Hill at 17:28 No comments:

OS Locator is useful. As I have said before it helps OSM mappers in Great Britain find places where the names of roads we have mapped disagree with the names Ordnance Survey have. The reasons the names differ are many and vary across different types of road. Many country roads just don't have a name board, so if we use the OS name there can be no difference  - except that the names on OS StreetView are sometimes different from the names on OS Locator. This might imply more errors being possible where all the roads are named. There are typographical differences such as names with or without a space (Tweendykes Lane vs Tween Dykes Lane) or use of apostrophes. Sometimes the name is just completely wrong. Just occasionally a road can have two or more name boards that do not agree, but I've only seen a small difference such as use or not of an apostrophe.

OS do not provide the definitive name, that is the local council that the road falls into. Where a road straddles two authorities this can cause a problem: a road called Endyke Lane in East Yorkshire turns into Endike Lane as it crosses into Hull, though now not exactly on the boundary.

I believe the name board on the ground to usually be correct, after all if the board was wrong people on that street are likely to ask questions of their council and it may well get changed.

I saw a comment earlier today on twitter from Tom Chance (@tom_chance) about the discrepancies in Southwark and they looked to be at a similar level to East Yorkshire and Hull that I have worked on. I thought I'd take a look, and ended up examining some some from the very useful ITOWorld OSM Analysis page. I took the twenty nine areas that were 100% complete and worked out the percentage of name anomalies for each area. The graph of the results is below: 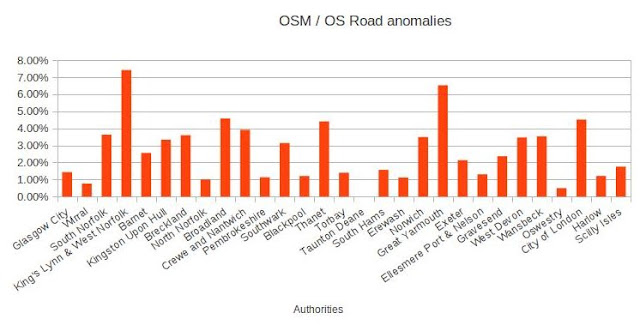 The average percentage of anomalies is 2.65%. The idea that there are no anomalies in Taunton Deane seems odd to me, though possible.

This looks like a spread of differences that might reflect the fact that different surveyor work in different areas and everyone makes mistakes. Has an OS surveyor misread or misrecorded or mistranscribed a name? I feel that many of the anomalies will have been rechecked on the ground by OSM surveyors, in case they were wrong, so in general I trust OSM more than OS. I hope that no one just uses the OS names in the belief they are always right.  There is also a very small chance that both OS and OSM have misrecorded a name in the same way so they agree (no anomaly) but are both wrong.

Thanks to Ordnance Survey

About two and a half years ago Ordnance Survey released their OpenData. It keeps getting updated so anything that uses it can be updated and improved too. The Code-Point Open data which includes GB postcodes (not postcodes for Northern Ireland) were updated in August so I reloaded them on my postcode overlay. You can see more here, including my postcode finder.

Another one of the OS OpenData datasets that I particularly like is OS Locator. This gives a bounding box for each named road in Great Britain. If these names are compared to the names in OSM the anomalies can be derived and then a survey shows where the name or the whole road is missing from OSM or where the name in OSM or the OS Locator data differs from what is on the ground. ITO World publish the list of anomalies, grouped by local authority. The thing I like best is that as new OS Locator data is published, new anomalies appear, particularly where new developments are taking place. In effect OS are helping keep OSM up-to-date by pointing where new roads are being built. I use the map tiles ITO provide to show unresolved anomalies as an overlay on a comparison map to help track them down. We tracked down a couple of these anomalies and added more detail to OSM than the OS Locator data suggests because the developments have moved on since OS added to their dataset.

In north Hull, around Kingswood, there is a a substantial development steadily being built. It keeps getting highlighted on OS Locator data as it gently expands. It is going slowly, probably because money is tight, but nonetheless it is gradually filling up the allocated space. Ground level of the development is below the level of the high embankments that retain the nearby meandering river Hull. The nearest higher ground reaches to a 10m contour about two kilometres away. Older maps show the former criss-cross pattern of drainage ditches leading to Engine drain and Wawne drain. Water from these drains has to be lifted by pumps (hence the name Engine drain) into the river Hull which wriggles its way through the city to the tidal Humber about five kilometres away. Some of the former farmland that this development is built on belonged to Ings farm and surrounds a very small woodland called Ings plantation. Ings is a local word meaning a water meadow or flooded meadow. Some of the trees in the plantation are alder, which grow in wet places, such as marshes or seasonally flooded areas. All this points to why no one built here before - flooding.

I'll add the development to OSM as it grows, but I wonder if it is also being added to maps in insurance companies as an area liable to flood.
Posted by Chris Hill at 12:06 No comments: