OS Locator and being thirty years too late

In May the latest Ordnance Survey OpenData was released for OS Locator. This has been turned into something useful by Robert Scott in his Musical Chairs application and ITO World's OSM Analysis. ITO also provide a tile layer which I have used on my site, oscompare. These tiles get used in the editor imagery layers too.

The ideas of these tools is to show the places where OSM road names differ from the road names provided by the data in the OS Locator dataset. They both take a different approach, but both showed that two new roads had appeared in the OS Locator data that were not there before. We set out today to investigate them, and what we found couldn't have been more different.

The first road that OS Locator showed up was Stanmore Close. This area is part of the redevelopment of the Ings Road area of Hull. I have been anticipating needing to survey this area because some of the old council homes have been standing empty waiting for a bulldozer. When we got there we found that not only has the bulldozer done its work, but the builders are in busily replacing the houses. Some of the roads from Mitcham road, which were cul-de-sacs now join Mitcham Road with Camberwell Way. They have names ending in Close, but they are not now a close, however the names stand. I have extended all of the new roads that I could get access to, it looks like a bit more to come yet.

This is by far the best use of OS Locator in my book. It showed me that there was an area of Hull that had changed, I went out to check what had changed and improved OSM in the process. 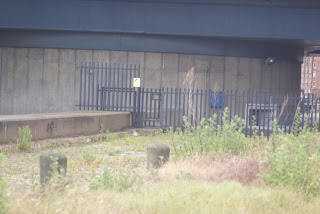 We then moved to look at the second new road in the city, Garrison Side. This is an area I know fairly well, and I was very sceptical about there being any new road there. As soon as we arrived it was clear that something odd was going on.  The site is close to the place the river Hull flows into the Humber. There was a defensive garrison built there in the seventeenth century, very long since ruined and disappeared. The road suggested by OS Locator would have been along the garrison boundary with the river Hull. A new river crossing over the Hull was opened in 1981 and the bridge cut through the place this road would have been. The photo shows one of the bridge piers slap bang on the place Garrison Side would have been. At the other side of the bridge there is a small remnant of a cobbled street in exactly the right place.

The last time it could have been there was before the bridge was built, so why has this obviously non-existent road suddenly appeared in the latest dataset from Ordnance Survey? If anyone needs reasons to check all the OS data on the ground before adding it to OSM, look no further. In fact if you're looking for Garrison Side you're thirty years too late.
Posted by Chris Hill at 17:02 No comments: