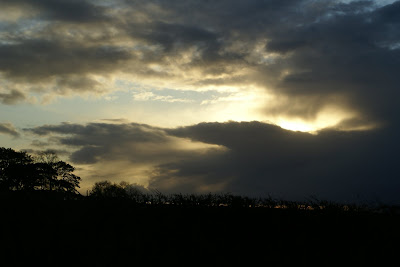 The howling wind had dropped and the sun had come out so we thought we would head out to the coast, filling a few roads in on the way. The village of Aldbrough on the East Yorkshire coast was our target.

This coast line is being washed away at a great rate, but Aldbrough is far enough inland to be safe for very many years. Near the coastline there are caravan sites, as there are along many of the villages up and down the coast. I was expecting to drive around the site roads, but the gates were closed, so I left them for another day. Then we decided to look at the beach, but the sign put us off ... 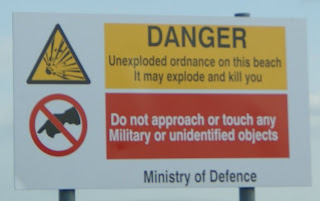 We polished off the village and then meandered home adding country roads as we went.
Posted by Chris Hill at 18:31 1 comment:

You live and learn

You know how it is, you think you know something well, then someone asks a question that floors you. Well today I was walking in our village when someone asked me where a house in The Park was. I was stumped. He showed me the address, but I didn't know where the road was. I have lived in the village for twenty years, my family has lived in the village for five generations, I used to deliver stuff locally, I have mapped the village from end to end on foot and yet I didn't know where the road was.

I asked around and found that small entrance off West Leys is not the driveway I had assumed but is actually a short roadway called The Park. The road is not named at its entrance, but a house has the road name displayed on its name board. It is now on the map; my pride may take a little longer to recover.

Later we took a look at some more of Hull, which is slowly filling out. We added a chunk around Lambwath Road, including Gillshill Road which borders East Park that we looked at last week. This also joins Sutton to the rest of the city.
Posted by Chris Hill at 19:42 1 comment:

A walk in the park

We went to East Park yesterday. It was a a bit cold and damp, but the walk outside was pleasant. We walked around the paths which cover the park, some of them have only been added recently. There's a lake with a bridge over it and the expected pitches and playground. I had to improvise the southern edge until I've completed a few roads that make inroads into the park. Take a look.
Posted by Chris Hill at 19:57 No comments:

We had some shopping to do this morning and on the way out we saw a strange car with a mast on the roof. The mast had a sort of box on it. In the afternoon we went out again and there was this car again (in a different place). Then it dawned on me that it might be the Google Streetview camera car. I thought that was on hold in the UK. Hmmmm. I wish I'd managed to get a picture of it. 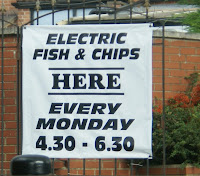 We set off to map Preston, a village just east of Hull. On the way into the centre of the village we saw an odd sign at the entrance to the Cock and Bell pub carpark. I'm not really sure what Electric Fish and Chips are. Are they both electric? Why would you want them? And then there's the dilemma of how to map them. I chickened out and left them off the map for now.

A bit later we saw a hedgehog scuttling across the road. I picked it up from the road and put it back onto the grass verge. It seemed a bit small so it might not make it through the winter hibernation, but I didn't run it over.

It took longer than I expected, so the road to Sproatley and beyond will have to wait.
Posted by Chris Hill at 18:55 No comments:

We went out into Hull to divide up some of the remaining space by putting a few roads and roundabouts in. We added a few residential roads too. We mapped a rather strange junction which could have just been a simple T junction, or even a small roundabout, but it all adds to the mix.

Croda, a large multi-national, has built a large wind turbine for its plant in Hull. It's attracting some attention, partly because it's so big. The picture does not do it justice. I've yet to add it to the map - it will have to be a guesstimate based on triangulation because I can't get access to the site. 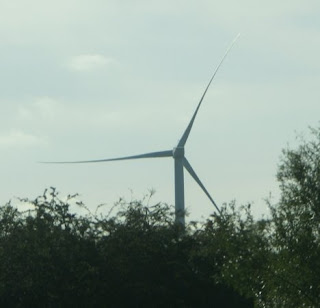 I've also been working on some code to draw tiles, entirely for my own pleasure and interest. I thought I'd write a blog about that too: codeblog.cjhill.co.uk
Posted by Chris Hill at 22:29 No comments:

A tale of two villages

On the south side of Hull there used to be a glorious piece of waste ground, right against the Humber bank. At one time it had been a dock, but it was long abandoned and it was very overgrown. There was wildlife here in abundance, butterflies, moths, weasels, stoats and loads of birds. The river Humber is a magnet for migrating birds and this bit of waste ground was a good place to see some of them very close to the city centre and close to where I worked. That was was twenty years ago and now it has been developed into the Victoria Dock Village. I can't think of any where less like an English village, but still it is popular and this week we added it to the map. I have sketched in a footpath that I know runs along the riverbank, but I haven't walked it yet with a GPS to get an accurate track. I think the riverbank is a bit out so it would tidy that up too. Map

Today we took a look at Sutton. This is rather incongruous as it was a village on the outskirts of Hull but it has been subsumed into the city fairly quickly and yet retains the feel of a pleasant village, something the developers of places like Victoria Dock would probably give good money to know how to emulate. Map

Mapping Sutton has helped to improve the track of the national cycle network route 65 which passes through Sutton on its way to Hornsea. It follows an abandoned railway line which I traced originally from the low-res Yahoo photos and I've been slowly improving it. I also need to improve the Hornsea end too.
Posted by Chris Hill at 17:25 2 comments: