We went to check out a few bus stops in Hull against the imported list from NaPTAN. As we were heading along Cottingham road a car caught us up and flashed its lights. He stopped and wanted to know why "You photo my wife?". She must have been at a bus stop. When we showed him the printed map and explained we were checking bus stops he calmed down and left. After he had gone I realised that I had some business cards with me with the OSM logo and web address on it and I should have given him one of them.
Posted by Chris Hill at 17:16 No comments:

So we had another little foray out to look at a few bus stops. We deliberately chose to look at a small number, firstly to see what the error rate seems to be and secondly to check our system works.

After some short mailing list discussion I have decided not to amend the naptan: fields in the imported data, except that I delete the naptan:Verified=no field. I extracted a list of all of the nodes created from the changeset when they were imported and loaded this into a spreadsheet. I'll use this to record any anomalies I find. So far we have looked at 38 bus stops from the import, 2 are missing on the ground, 1 is on the wrong road, 3 have the wrong bearing, one is on the wrong side of the road, and 2 have the wrong code on the sign, the rest seem good, though I have moved a few too. Only another 1261 to check.

Our process works well now, but I could do with a render that shows bus stops at a lower zoom level to get more on a printed map. I add source=naptan + survey, I add shelter=yes if there is one and I will add layby=yes if there is one (none yet). If I find something wrong I add a note to explain the problem, and I write it into the spreadsheet. This works well for me because it looks as though we're the only people working on this in this area, but if anyone wants to join in I'll just share the spreadsheet online.

I have also contacted Hull City Council transport team to see if they are interested in feedback from what I find, I've yet to hear from them.
Posted by Chris Hill at 16:30 2 comments:

Much of the data in the database for the UK were gathered either by tracing out-of-copyright maps or gathering GPS traces with notes or photos to add the detail. We do have some imported data though and NaPTAN is one. The National Public Transport Node database which has data gathered from local authorities about things like bus stops. A selection of the data was loaded for the West Midlands to trial and now the data for Hull has been loaded. We set out today to see how easy it is to verify.

It was pouring with rain when we decided to go, so we went in the car. This was our first mistake. Next time I'm going by bike. You need the bike to cover the ground between the stops, but you need to be able to stop at a bus stop, to take a photo and a GPS way point. The car was just a nuisance. The next mistake was to not check the camera battery before we set off; it promptly gave up after four pictures, one of which was the photo of the GPS to sync the times up. We then resorted to keeping a list and using GPS way points. This meant getting right next to the bus stop to establish its position.

The NaPTAN data loaded has made many tags, including a code, the street name the stop is on, a name for the stop and other location stuff like a street that is nearby. Part of the code is displayed on the bus stop sign. All of this seems fine, until you discover a bus stop that is not where it's supposed to be. We found a stop on Sibelius road but the ID was for one described as on the nearby Gershwin Avenue. One of the tags is a bearing to help understand the direction that the bus would go from the stop, such as N (north) or SW (south west). The bearing for the stop was N but the stop faced west. I moved the stop to reflect its real position, but should I change the NaPTAN tags? I've asked the talk-transit mailing list what they think, but the more I think about it the more I think that the imported data should remain. Maybe our findings should get fed back to the authority that created the NaPTAN data and amend them.

I think the whole exercise will take ages to complete, but it will be a background task to fit in around other things. A few other things will make the process easier. Firstly I need a render of the map that shows the bus stops but more zoomed out than the standard renders which only show them at zoom 17. I also need to process the bus stops to produce a list we can work from. I downloaded the OSM changeset of the upload to work from so I'll process that into some sort of list. This process might be useful to other people who follow with all of the other areas of the UK.
Posted by Chris Hill at 16:18 1 comment:

We've paid a few visits to the Goole area now, firstly the village of Hook which lies in the bend of the river Ouse to the north east of Goole. Then we took a look at Old Goole which lies to the south of the town. Both times we nibbled away at a bit of the town that was closest to the village. Today we waded in and tackled part of the town centre and residential area south of the railway.

Hook was straight-forward. It is a pleasant place but rather ominously there is an embankment between the village and the river. I want to improve the river bank and there is a footpath along the top of the embankment so a walk is in order. I think the river bank was drawn as part of the coastline process from aerial photos. It is very jagged which is not how the river looks, but the only way to make it better is the walk it with a GPS. I would find it hard to live under the embankment without constantly checking how high the river is on the other side. About one fifth of the rainfall of England flows out of the Humber into the North Sea; the Humber is mostly fed from the Ouse and the Trent.

Old Goole is a rather run-down place on the outskirts of Goole near its docks. We trolled around seeing two abandoned churches and a single small supermarket. We headed into Goole to look at the industrial estate near the docks. We discovered a bustling, thriving marina at the end of the Aire and Calder canal. There was a mix of canal narrow boats and motor cruisers. I think there is access into the river Ouse through lock gates. There is a public footpath through there so I'll get a better look.

Today's push into the town was through a tangle of Victorian terraces which was quite a tricky job to draw up later. The buildings gave a couple of areas with poor GPS reception and some of the name plates on the streets were hard to find and very hard to read. Some of the streets were completely boarded up ready for redevelopment, presumably when the building industry picks up.

The town still needs much more work so a few more visits are needed. I'm not sure when we will return because Hull is about to get all of its bus stops loaded from the NaPTAN import. We then need to visit them to see if they are correctly positioned. We have not tagged any bus stops so far so the issue in some areas of merging existing stops with the new imports will not apply, but the experience of the Birmingham team who processed the first import indicates that most stops need moving and that some will be missing or spurious. We'll see what we find.
Posted by Chris Hill at 17:56 1 comment: 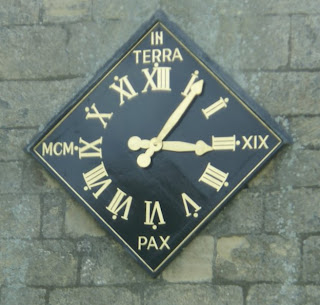 Whitgift has a fine old church - nothing odd about that, but take a look at the clock. The shape is novel, but not too strange. The motto, In Terra Pax, means Peace on Earth, again not an unusual wish for a church. Just take a close look at the number at the top of the dial ...
Posted by Chris Hill at 17:48 1 comment: