We went out today, partly for a ride out on a lovely day, and partly to check some stuff for OSM. Like a lot of sorties to gather map data, it just leads to more detailed uncertainty later. I checked a few bus stops in North Cave, but when I got home I realised that the street name on the NaPTAN data did not match the name on the street in OSM. I can't resolve the problem at home, so we need to go out and check again. 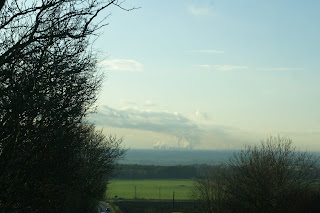 On the way we had a view over the Vale of York from the edge of the Wolds. In the distance is the huge power station of Drax, making about 7% of the electricity of Britain, using coal imported from Australia, with vastly wasteful steam rising from the cooling towers to form the biggest cloud in the sky today. Later in the day there was an item on the TV about electric cars, but while the power to charge its battery comes from places like this and is delivered through the national grid with all of its losses, they make no sense at all.

Later we checked out the approach road to the prison at Everthorpe, officially HMP Wolds. It seemed a bit odd driving towards the prison, but it seems to be a public road, though I think we were on several CCTV cameras. We took a turn around the roundabout at the end and left as quickly as we could without seeming to hurry. I don't think it would have gone down well to take photos.
Posted by Chris Hill at 20:51