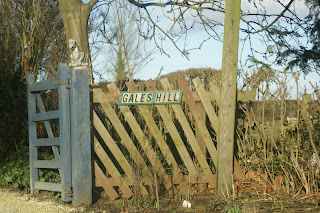 If you are using OS Locator for road names, beware of surveyors who can't tell a house name from a road name.
Posted by Chris Hill at 18:20

Coppleflat Lane - the 1892 OS map shows it as a short section from the Newbald Road / Walkington Heads crossroads, towards Killingwoldgraves Lane. Did the OS surveyor make it up? I prefer to think that it really was called that at some time, though the name has been applied, presumably incorrectly, to Mill Lane. Next time I see my elderly Aunt, who was born and lived at Killingwoldgraves Farm, I must ask her about it.

Thanks for your feedback.

Constitution Hill.
The road name can be Malton Road (as it is signed) and change to Constitution Hill at some point but there are no signs to indicate where this happens. The way the OS describe the change with OS Locator is clearly wrong, since houses that definitely are on Malton Road (that is their address) are shown as on Constitution Hill. Since there are no signs I have to act according to what is on the ground, unless extra evidence comes to light. OS Locator can be used as extra evidence, but it is sometimes wrong and certainly somewhat wrong in this case. If you have better evidence I would be delighted to incorporate it - or you could change it yourself.

Coppleflat Lane
Again, There is no sign on the road name on the ground and plenty of contradictory evidence on signs. If you find extra evidence I would be pleased to incorporate it.

My aim is a quality database and map, based on evidence that is consistent with our open licence. Local knowledge fits into this evidence. Things change over time, and some of these changes are due to OS making mistakes that, because of OS's reputation for accuracy, become held to be the truth. I am keen to be sure that OS data is not just used without being checked. OS naming of rural roads is far from perfect and errors often goes unchallenged because it does not directly affect the address of a property. Any mistakes that are found are being fed back to OS for them to investigate and they may yet not agree.

Hey - this is really interesting to read. I'm a young guy from Beverley, East Yorkshire. Stumbled upon here searching for Coppleflat Lane. It's fascinating to learn how things change and develop! Thanks