There is a list of roads sorted by county that compares the names on OSM maps to the names on the OS OpenData Locator. Chasing the names to get 100% is a bit phoney, but using OS Locator to find what is missing and especially if something has been added since the last OSM survey is very good. However much I think the name chase is phoney or even invites people to add stuff to OSM that isn't correct or surveyed, to make use of the idea that OS Locator help find new stuff, first you have to get a clean state to work from. The simplest clean state is to survey all of the roads that show up as anomalies and resolve the anomalies. In the process you see more details to add and things that have changed, such as closed pubs. I only add what I have seen for myself, though I will use aerial imagery and OpenData to assist with things like just what is the extent of that playing field that I now have the name of and can see is in use. Using OS Locator names for roads where the name board is not present is sometimes an exception, in that I have not seen the name, but I use it anyway. I do of course credit OS with a source:name tag. 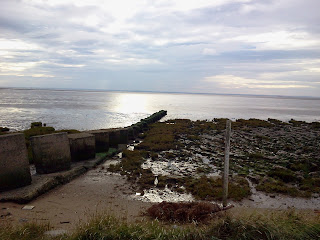 Today we focussed on the southern part of the Holderness plain in East Yorkshire. It is a fairly flat area, with fertile aluvial soils making farming productive. The southern edge borders the Humber estuary which is miles wide at this point. Today the tide was out and the huge expanses of mud flats were exposed, which is what the wading birds like to feed on. The wild life is worth looking out for. It was a lovely place to take a break.

My aim is to clear Holderness steadily from the south, working past Withernsea towards Hornsea. I was contacted in the week by Stephen who mapped the whole of the town of Withernsea and then went quiet. He has now accepted the new licence which is very welcome; instead of starting again with Withernsea we can build on his good work and concentrate of places that need surveys, like Hornsea.
Posted by Chris Hill at 18:05