Beverley, in East Yorkshire, is a market town, which like many others, feels like it is all jammed into a small space. It has expanded into two adjoining villages, Molescroft and Woodmansey but the space within Beverley is still at a premium. The town has had industry in the past, especially a large tannery and I expect the good people of the town are now probably happier not to have the place as the smell was awful. The site became a museum for a while but for some years it has lain as rubble strewn waste ground. Now a new housing development has started and the first houses are complete.

I have been biding my time, waiting for access before I surveyed the roads. When the latest OS Locator comparisons highlighted three of the roads as missing from OSM I decided it must be time to take a look. One road, Simmonds Close, is quite conventional, but the other two are a little different. The front door of these houses face onto a short pedestrian road with a service road behind each one with garages and access to the rear of the houses. I wandered up each road, GPS in hand and chatted to the builders who were finishing some of the houses off, then went on my way.

When I got home I discovered that OS Locator has labelled the service roads as the missing roads (Hamilton Walk and Dickinson Walk). I suspect the clue is the name guys, the walking bits are the named roads, not the service roads. 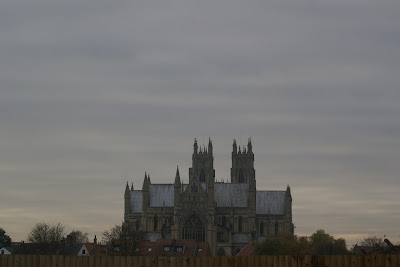 There was a good view of Beverley Minster from the end of one road.
Posted by Chris Hill at 17:05