Back to the river 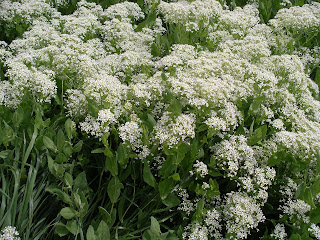 We had another wander along the banks of the river Hull. This time the section of river bank was closer to the city centre so I didn't expect it to be quite a green and open as the first section we walked. Part of the route was bounded by industrial areas, but there were open and pleasant areas too. Overall the walk was very pleasant and interesting. There were no butterflies around today - it was a bit cool and much too windy for them I think. We did see and hear plenty of birds. We heard more reed warblers in some reed beds and we saw a common sandpiper and a white throat. We also saw a bed of very fragrant flowers on the river bank that we are still trying identify (any clues anyone?) . 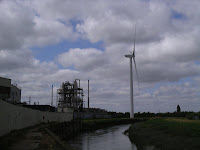 We've seen a big wind turbine from all over the city, but today we walked very close to it. The photo doesn't really give the scale of the thing, but the works in the foreground are huge, yet they're dwarfed by the turbine. The wind was fairly strong, so the blades were whipping round with a deep whoosh. We found a little fishing pond nearby which I didn't know about and we had a look at the fairly large recreation ground next to it. I think I'll take a better look at this sometime later.
Posted by Chris Hill at 19:49