We've been out gathering data again. It felt like a pleasant walk along a river bank but we were actually gathering data. That's how OpenStreetMap works, some people get on with gathering data, some people use the data in exciting and creative ways, some people put in hours to manage the infrastructure and support software and a few people think of ways to short cut the process by importing data from other sources, some good, some not good and some would infringe other people's copyright if they were not stopped. Fortunately most people get the way it works and do the leg work to make a wonderfully complete map, which, by the way, is free for anyone to use.

Today's data gathering was a walk along both banks of the river Hull between Sutton Road and Raich Carter Way. It turned out to be a very pleasant walk which for some of the time was hard to believe we were in a city at all. As we set off we passed a sunny glade between some bushes in in less than a minute we saw many butterflies including an orange tip, a comma and a green-veined white. They all flew off before I could photograph them. I've had lots of practice photographing butterflies and a sunny, breezy day makes it hard. There was, however, a speckled wood which did sit still long enough for me to snap its image. I think it felt safe against its background.

We then wandered along the path on top of the embankment at the west side of the river. There were swallows in the air and from the reed beds alongside the river we could hear the calls of reed warblers. When we reached the bridge at Raich Carter Way the traffic seemed deafening. We returned down the other bank, quickly getting back to the quiet and leaving the traffic noise as a very distant hum. The path ran along side open space with hedges and bushes full of birds. I really enjoyed this stroll. I'm looking forward to another one along another part of the river. 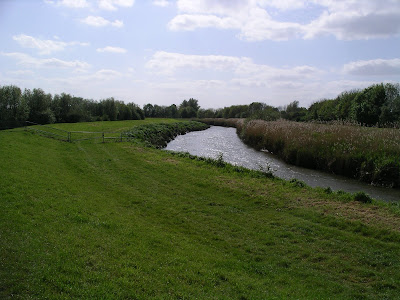