Cliff and a chick

Holderness is a part of East Yorkshire between the coast and the rolling hills of the Wolds. It is peppered with small villages and very small rural roads. The land near the coast is being lost to the sea at nearly three metres each year and the villages, roads, farms, caravan sites or anything else just descends to the beach as the muddy cliffs collapse, usually in a winter storm. 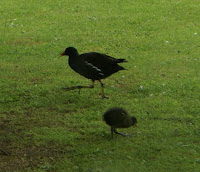 We went around the little villages just north of Hornsea ending at Atwick on the coast where we saw the sign. The small villages are what we were expecting by now. Some don't have speed limits, most don't have any street names for the main drag through the village. The houses have names rather than numbers. They have a post box, maybe a church and maybe a pub. Occasionally there might be a pond, and where there's a pond there's often ducks. If you're lucky there might be a moorhen, or even a moorhem with a chick. The pond goes on the map, but not the moorhen, even if it has a chick.
Posted by Chris Hill at 18:52

Three meters per *year*!? That's an insane erosion rate! The worst I've heard of in Australia is a few areas around Byron Bay (poorly mapped) which get flooded during king tides or once-every-10-years storm events.

Have you got any photos of the affected areas?

The Wikipedia article for Holderness says 1.5 metres, but the Hull University reports says up to 2.8 metres of land loss per year. The cliffs are fairly low made of clay deposited during the last ice sheet which retreated about 12,000 years ago, so geologically the land is very young and seems to be temporary. This is the fastest eroding coastline in Europe, by far. It makes mapping a problem - all out-of-copyright maps we can trace from are inaccurate now. The towns like Hornsea and Withernsea and the huge gas terminal at Easington all have concrete defences, but the rural cliffs are not worth defending. The beaches are good, some pebbly but many with good sand, but the tide can come right up to the cliffs so you need an escape route! I'm planning to walk some of the beaches to get a new coastline trace, so photos will be part of those trips. I found a website about Aldborough further down the coast with some cliff photos on it.