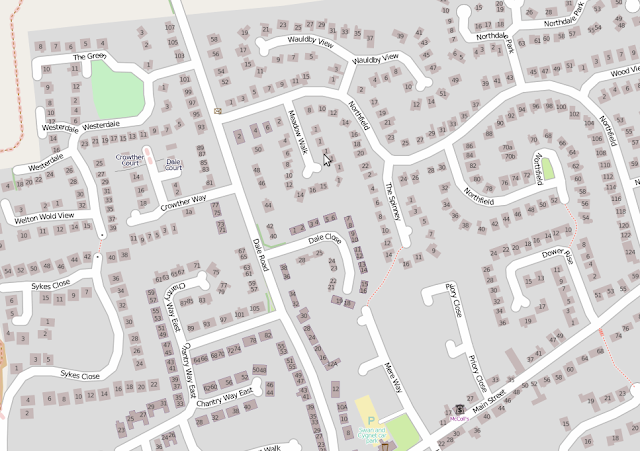 The one set of data that are a struggle are postcodes. When the OS Opendata was released it included postcode centroids. These are the centre of the area a postcode covers. I ignored it, but now I'm working on visualising these centroids in an editor to see if the postcode for an area can be reliably discerned. That is going well, but rendering the tiles may produce far too much data for my web site to handle, so I'm weighing up the options: limited coverage, dynamic tile generation or find somewhere else to host the tiles. First though I'm going to see if they are useful.
Posted by Chris Hill at 15:58

Like you say, collecting addresses is very tedious work. I am doing the same in my neighborhood http://osm.org/go/T2JZ1eR8y-

I started off by writing an import/screenscraper process that created addresses (see video here http://bit.ly/h5Cr68) in an .osm file that I could upload via JOSM. In subsequent discussions with other OSMappers I learned the value of not writing import scripts sometimes and just getting the data via feet-on-the-ground surveying. So I have been scheduling my walks to coincide with unmapped streets in the neighborhood so that I can gather a waypoint at each property location. Later I use JOSM to draw the building outlines and then use my waypoints to add the address information.

At the beginning I created an address node. In later iterations, I just added the address tags to the building way. My goal is to make the addresses searchable by Nominatim. I need to better understand which format of address (ie, as a standalone address node or as address tags on building ways) works better. This link http://wiki.openstreetmap.org/wiki/Nominatim/FAQ provides some information, but is not totally clear to me.

How do you tag your addresses?

Alfred,
I use the Karlsruhe Schema for addresses, I think most people do. http://wiki.openstreetmap.org/wiki/Proposed_features/House_numbers/Karlsruhe_Schema

I strongly believe in gathering data from a survey. Using Bing imagery is helpful, but it needs checking on the ground otherwise we end up creating a map based on old aerial imagery.

I actually found I prefer to just have the streets and then add the house numbers and building outlines in the same sitting. This is because I don't like sitting at the computer over getting out surveying. With the terracer plugin it's quicker as I select the building and the rooad and press cntrl+t and it adds the appropriate address tags after I specify the number range. In fact I even use it on detached houses as I don't have to retype the street address.
So I would say add address tags to the building. I've done Elvet, Claypath, and most of North Gilesgate. http://osm.org/go/evn8H0KH-

It's very rewarding/helpful doing a resurvey of Durham. Some of the roads were mapped by me over 3 years ago. I find mistakes, omissions, and occasionaly new stuff. The maajority of it of course is perfect and high quality mapping.

Gregory,
In an old village with lots of in-fill buildings, very different sized building plots and buildings and odd numbering schemes I found taking a drawing of the buildings out worked well.

It certainly helps to resurvey an area. Things change, new stuff appears and our standards have changed - adding speed limits and lit=yes/no, adding barriers like hedges and so it goes on ...