After looking at the routing of NCN 1 yesterday, I thought I'd check out the braids of NCN 65 today. When something is on your doorstep and you know it well it is easy to ignore the signage, but today I put myself in the shoes of a visitor trying to follow the National Cycle Network route 65 in my local area.

Firstly I hope such a visitor would have a lovely map based on OSM or a GPS route based on OSM because then they would make sense of the route without looking at the signs. Along the route it is generally signed well, but at a couple of important decision points the signs could be better. The section of the NCN 65 I'm interested in here is also shared with the Trans Pennine Trail. You can see it here on Andy Allan's lovely cycle map. The route, travelling west to east enters North Ferriby and arrives at the crossroads, as shown in more detail from Andy's map here: 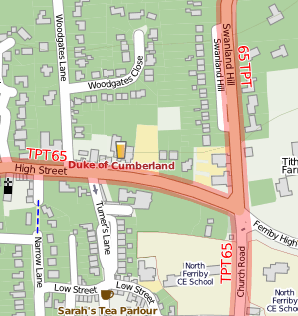 As you approach from the west you can see this sign:

The sign seems to say that the NCN 65 turns left (along Swanland Hill) and local cycle route turns right (along Church Road). This is actually where the two braids of NCN 65 split up, but the sign doesn't make it clear that route 65 could be either way.

If you do turn left you are taking a longer braid that goes through the villages, the shorter, flatter route is to the right and follows the Humber bank to Hessle. Both routes are fairly well signed along their length and I think I could find my way just following the signs, but you might be confused if you did turn right to find you are still following NCN 65. 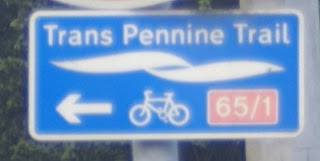 Suppose you are travelling east to west and you have followed either braid to this point you want to be sure you turn west along High Street to continue correctly and in both cases there is a sign to help.

But look again, where did that '/1' come from on the second sign? This shows that if you are travelling north up Church Road and you turn left you will be on NCN 65 (correctly) and also on NCN 1. NCN 1 is not on that road and if you head left you will be heading away from the nearest point of NCN, which is in Hessle where you just came from if you are following NCN 65, and you will not meet NCN 1 until you have circumnavigated the world.

So what about the other point at which the route diverges into braids? That is in Hessle as Andy's map shows: 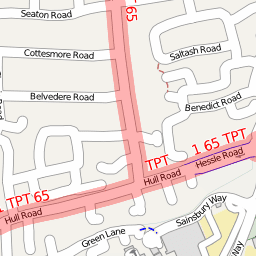 The route from the east divides at the junction of First Lane and Hull Road. If I am travelling west the sign one sees is this (sorry for the photo): 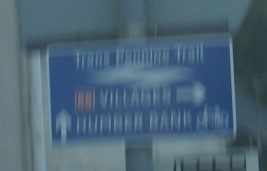 This shows the route north, through the villages is NCN 65 and the route west appears to be a local cycle route to (along?) the Humber bank. Again if you travel straight on here you be surprised to find you are still on NCN 65, which is well signed. If you arrive at the junction from the west a sign clearly points you to carry on eastwards as expected (no photo available) if you arrive along the braid through the villages south down First Lane you are greeted by a this sign: 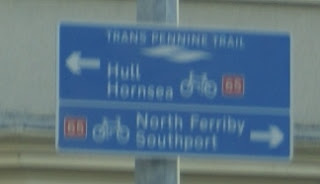 This is informative, but slightly confusing. If you are following the whole route and chose the villages braid you need to turn left to continue, if you turn right you will return to North Ferriby where you made the choice by the Humber bank route. Since both are labelled 65 this is not entirely clear. 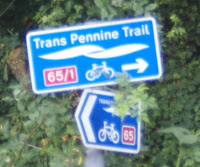 There are other anomalies along the route. Where NCN 1 joins with the Humber bank braid there is a sign showing the route 65 in brackets, it is not in brackets anywhere else that I have seen. About four kilometres away in North Ferriby the signs that show 65/1 are repeated, even though this is certainly not NCN 1 and the newer sign in the opposite direction has this right.

As I mentioned in my last post, Sustrans want to change the braids to make them uniquely numbered or named. That is a good idea, but will mean changes to some signage and especially at the places braid join up.

As usual a trip out even to a very local area revealed something I had missed before and I have added the name to a very small park at the point in North Ferriby that the braid join.

Maps on this post are © openstreetmap contributors for the data; the map tiles are by Andy Allan.
Posted by Chris Hill at 17:40

In my experience, one problem is that local councils don't really understand cycle routes. Staffordshire County Council, for example, appears dimly aware that NCN 54 runs through Burton. Consequently every cycle route sign that goes up gets a red '54'. No matter where it is, whether it's remotely related to NCN 54 or not. There's a role for Rangers in sorting this out...

I agree councils don't understand cycle routes, they may now be taking them a bit more seriously. They understand the concept of a numbered road route for vehicles and the idea that a road leading to a place can have a sign saying so. I wonder why cycle routes are so hard? Certainly two braids with the same number can't help so Sustrans sorting that out should help.