The process of hunting down postboxes is turning out to be interesting and varied. We checked out the HU8 postal area of Hull and compared it to the list from the Royal Mail - we had many missing. We organized a route which started up Holderness Road, which is one edge of the postal area. This was a good idea because many of the locations which were described as streets that lead off this main artery actually turned out to be boxes on this main road fairly close to the named side road. We also found a few boxes which are in the next postal code area.

As before, some of the names are feeble or even misleading. One box's location is GardenVillage. This is a part of the city built by the Quaker Reckitt family, the owners of a large company now called Reckitt Benckiser. It was built to provide their workers with good quality homes and it still remains a very pleasant area of the city, even though there are no pubs - the Quakers were tee-total. There are many roads in the village, so the description was a bit 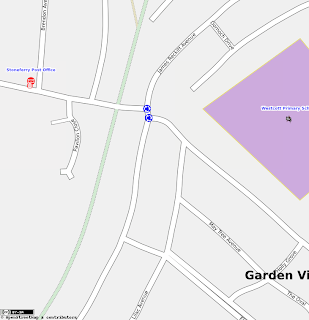 vague, still, we found it.

Much harder was the nearby box just described as Laburnham (sic). There is a road named Laburnum Avenue on the edge of Garden Village, but there was no box on it. We checked Holderness road because it could have been close to the end of Laburnum Avenue, but no joy, so we gave up and found a couple more, but on the way home we thought we would look again and drove down Chamberlain Road to get to Laburnum Avenue again. We saw the Stoneferry Postoffice in Chamberlain Road, which was already on the map. I checked the reference number on the box outside it - lo and behold it matched the id of the box described as Laburnham. Still, it wouldn't be as much fun if it was easy!
Posted by Chris Hill at 18:23