I've taken a look at the list of post boxes supplied by the Royal Mail after a Freedom of Information request that someone else made. The list is terse, to say the least, but it gives a reference code for the box, a post code (which is not PD in the UK) and a location. I looked at the map of the area we have drawn and decided that some postal regions are pretty poorly covered. When we started mapping we were happy to get the track of a road with its name. We maybe got a pub or a school but nothing as simple as a post box. So today we have used the list to work out where post boxes were in the HU3 postal area that we don't have on the map and track them down.

This was not as easy it it sounds. Since the Royal Mail supplied the list you would expect that they would know what the addresses of these boxes are. That turns out to be pretty dubious. One box has an address of Ocean place, Ocean Place, Hull (actually in HU1 but near where we were so we checked it out). I couldn't find Ocean Place on our map, so I was concerned that we had somehow missed a road, but a bit of googling and I found that Ocean Place was a terrace of houses (not the name of the road) built in the 1820's and demolished for a new road scheme in 1963. The Royal Mail still thinks the box is located at a place that was demolished forty-five years ago. The box in St Matthews Street just is very well hidden - we couldn't find it at all. Some of the locations are very approximate, sometimes many metres or even tens of metres from the end of a road that is given as their location.

We did find a lot of boxes, here's the photos of some that we found today. 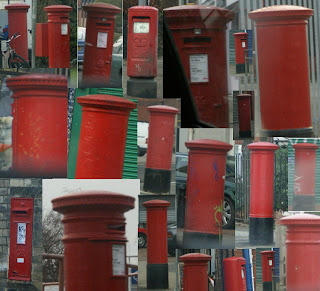 Getting the location of postboxes through FOI is a great idea!

Can you get a complete one for the UK? Then we can go out and find them all!

A chap called Tom Taylor made the original request. A version of the list is on http://www.dracos.co.uk/play/locating-postboxes/export.php?rm=1