I've been going through the list of places in East Yorkshire that still need a first-pass mapping session. I found a few places where my list was out of date and when I'd sorted that out suddenly another milestone was passed - more than 200 of the villages and hamlets in East Yorkshire have had that first pass. There are still about seventy to go. Most of these are quite small, but there are also some towns, including Bridington, Goole and Pocklington. 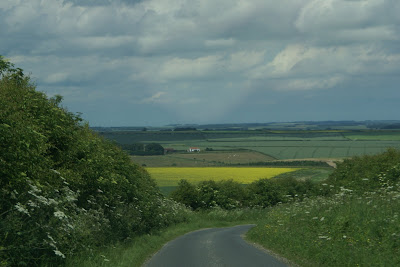 Today we drove out into the beautiful Yorkshire Wolds to take in Middleton on the Wolds. We took the small country lane route rather than the main roads; the views are better, it's quieter and it's quicker. The village is quite small and straddles the A614. A disused railway skirts the village, indeed part of it has become a road. This non-railway still appears on the Mapnik map and now on the Osmarender map too. Eventually we will wake up to taking this junk off the main map and moving it to a specialist map.
Posted by Chris Hill at 18:11