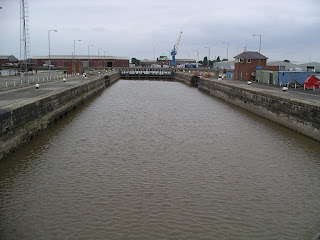 We took a stroll along the bank of the River Humber, not in a scenic countryside setting, but through the city of Hull. It's amazing what you talk yourself into in pursuit of a decent map. Part of the route was along the Victoria Dock village waterfront - it's just a newish estate built on an old dock, but I expect that the spin of calling it village put the house prices up. It seems a pleasant enough place, with open spaces and a pleasant waterside walk. Further east the path runs next to part of the dockland of Hull. The first dock is Alexandra dock. Much of the dock layout is hidden behind a corrugated shed, but the entrance to the dock is through a rather large lock, the photo of it was taken on the lock gate at the river end.

The tags for lock gates and locks seem to be geared up for canals, which there are many more of. Lock gates seem to be a node and the waterway=lock applied to a way, usually a canal. I need lock gates to be a way - these gates have a substantial path over them, and the lock to be an area. I've tagged them as I want them, (what else could I do?) but Osmarender ignores the tags so now the dock is not connected to the river. I'll see what Mapnik does.

There are more huge locks on the entrances of other docks that we have yet to look at so some sort of solution is required.
Posted by Chris Hill at 18:42