Byway over the cliff

A damp Sunday afternoon tempted me to scratch an itch that's been there for months. I decided to extent the mapping of the National Byway (NB) towards Bridlington. The last time we followed it we got from home to Sproatley. Since then I've come across tiny fragments while doing other things, including a loop which I've yet to follow.

I don't have the Byway maps, so I'm completely dependent on finding and following the sign posts. This is not always easy as a few signs get moved or defaced. We traced the route along small country roads to New Ellerby where it joins the Hornsea Railtrail. This is used for the NCN 65 route too. Using relations mean that the cycleway can be in both relations. The Hornsea end of the railtrail was just added from an NPE map so this was a chance to get it right. The trail ends sooner than I had expected; some of the old railway track now has houses built on it. The road route of the NB through Hornsea was hard to find due to one of those missing signs, but after a bit of a search we found it and followed the route to the sea front and beyond.

A bit further up the coast it ends up on a fairly busy road, the B1242, from which it takes a divertion towards the sea again. This time though there is a rather serious problem. 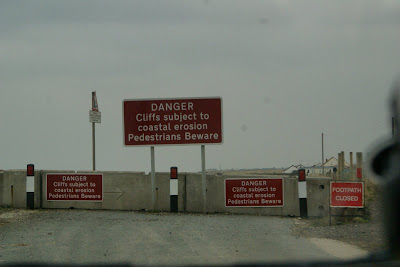 The Holderness coast is very soft boulder clay and is eroding very quickly. The little road that meandered along the cliff top from Skipsea to Ulrome now is no more. It has washed away, along with some houses too. I have added the roads as far as possible to the relation, but in reality anyone wishing to follow the NB will need to use the B1242 and miss out the sea front excursion.

We ended today at Burton Agnes. I expect to continue from there again sometime - unless someone beats me to it. Now I just need to find the trick to persuading Andy or Dave to add the National Byway to the excellent Cycle Map.
Posted by Chris Hill at 19:32

I'm planning to get a stretch of NCN 65 done, from Middlesborough to York. Looks like it wouldn't take like to complete after that.

Excellent. I'm planning to join the part already mapped towards York. It may well take me until the summer and someone else may get there first!